Indian Naval Ship Shivaji had its humble origin as a replacement for the ‘Stokers' Training School at HMIS Dalhousie located at Naval Dockyard, Bombay. Commissioned by the then Governor of Bombay, Sir John Colville, as HMIS Shivaji on 15 Feb 1945, it was rechristened as INS Shivaji on 26 Jan 1950, post-independence. 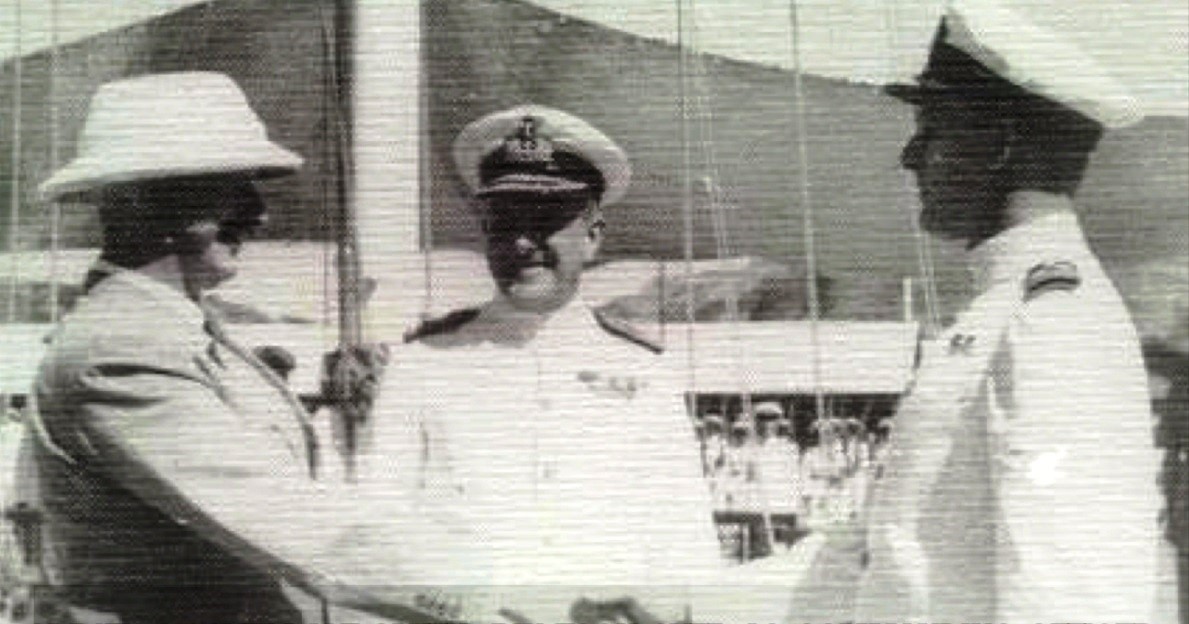 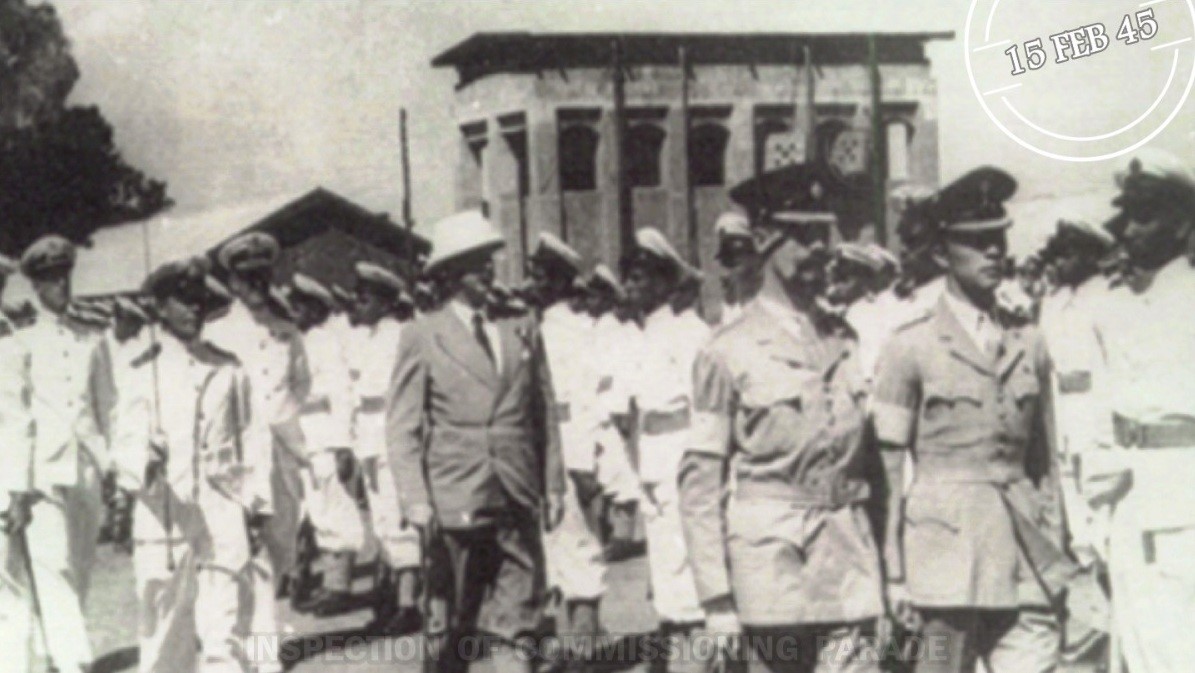 Since then, INS Shivaji has dynamically evolved into a premier technical training institution of the Navy keeping pace with the rapidly changing technologies in all facets of Marine Engineering. Read on to know the fascinating story of how INS Shivaji came into existence……

To provide a scope for further expansion and to isolate the trainee sailors from the country's politics in the 1940s, the Royal Indian Navy (RIN) decided to shift the training establishment from Bombay to a quieter place. While the British were on the lookout for a suitable location, coincidentally, an air accident took place in the Sahyadri Ranges. Those who came to investigate the accident found more than what they sought. Sandwiched between a sheer vertical rock face, covering the entire height of the hill range (Tiger's Leap) on one side and another imposing rock formation (Duke's Nose or Nagphani) on the other, was this flat piece of land. Its tranquility and beauty held one spell bound, to be disturbed only by the occasional cry of an infant from a nearly village, Kurwande. Even today, this piece of land holds that bit of magic to any visitor.

The place had the right combination of all factors that contribute for a good training establishment. It had a salubrious climate - a natural outcome of its location up in the hills - and wide open space, with imposing terrain for a variety of outdoor adventure activities. It was adequately far from Bombay and Pune to isolate it from the maddening crowds and some of the politically explosive occurrences. No wonder this spot was immediately finalised for the establishment by Commander Nott, Chief of Staff to the Flag Officer, Bombay. Lieutenant Commander Joe Nuttal was given the responsibility of executing the move under the guidance of Lieutenant Commander John Coverdale Smith, the officer-in-charge of the Mechanical Training Establishment, who went on to become the first Commanding Officer of HMIS Shivaji. 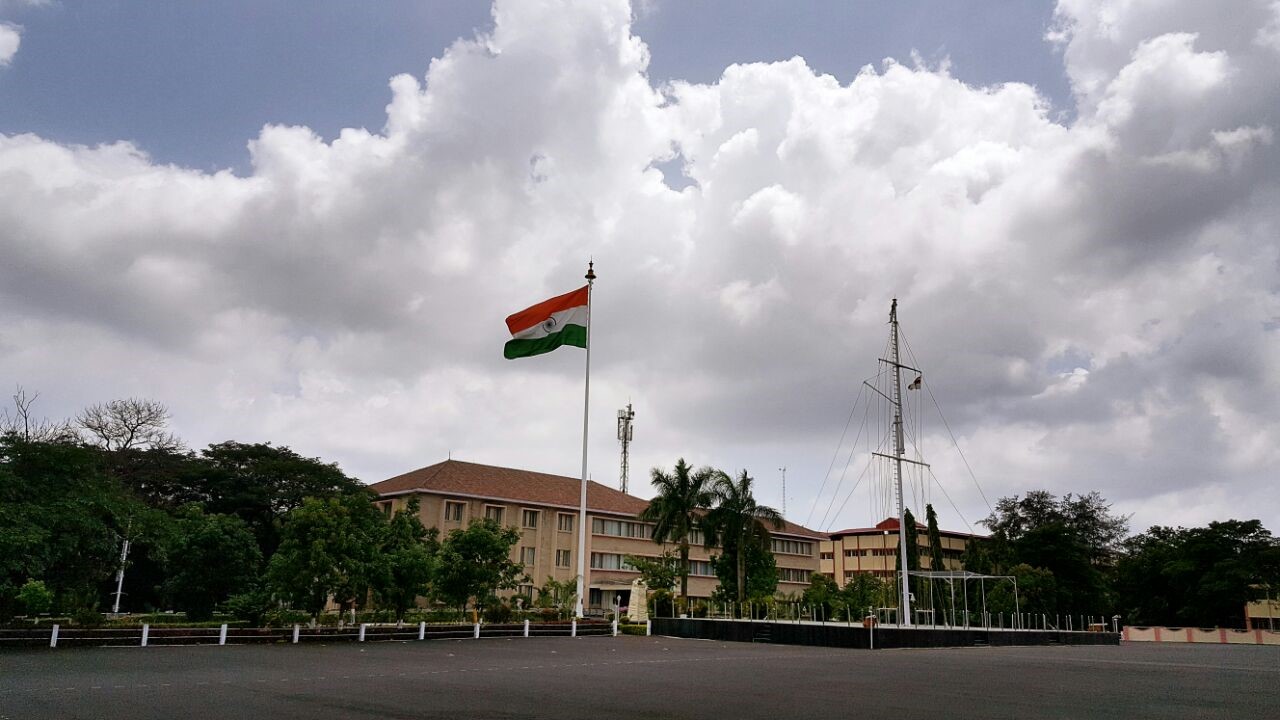 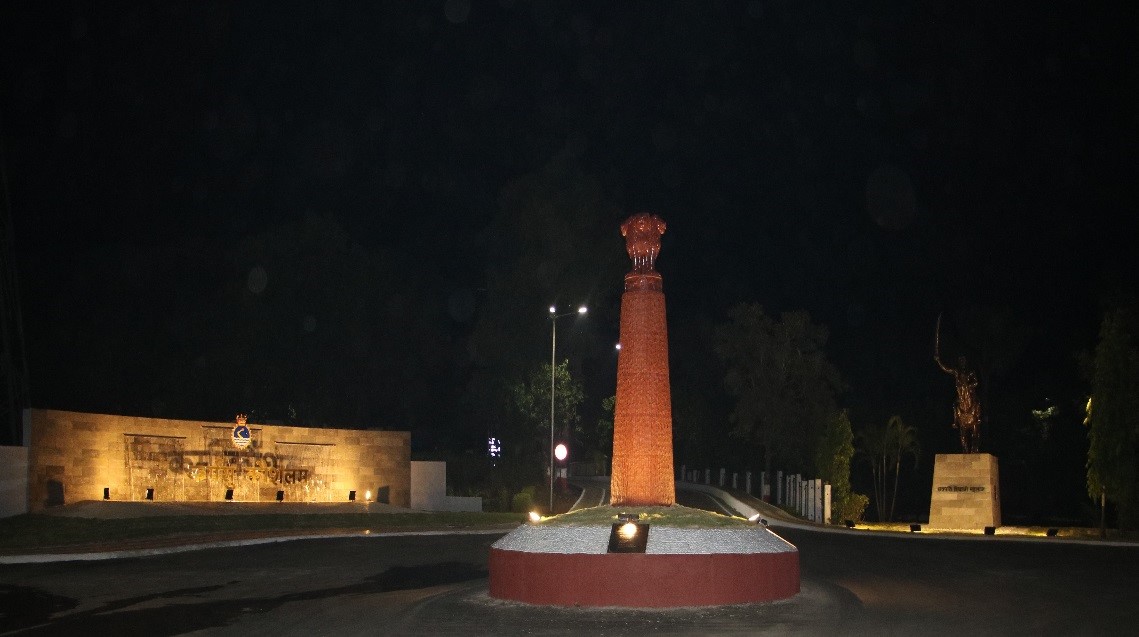 Today, the establishment is in its 75th year of commission and has been the fountainhead of Engineering knowledge, imbibing to its trainees the very essence of Professionalism, Confidence and Strength. Moving with time, if not ahead, the establishment has achieved significant milestones in various facets of mechanical engineering training in the Indian Navy.

The idea of having a Naval Engineering Museum in the Mecca of Marine Engineers, INS Shivaji was conceived when the erstwhile Steam Demonstration Room (SDR) was being considered for demolition in the late 1980s. The SDR, commissioned in 1949, had the privilege of training officers and men of the yesteryears using main and auxiliary machinery and equipment received from different ships of the Royal Navy of the World War II vintage. It was therefore felt that a great injustice would be done to the past generation of marine engineers, as well as the future, if this vital and valuable facility could not be retained and preserved for posterity.

The Naval Engineering Museum saw its next major upgrade in the year 2003 when it was recreated with a theme to show the growth of marine engineering technology. Various changes in terms of its main entrance, partition at main entrance, display niches and stand-alone units for machinery were incorporated. The present day avatar of Naval Engineering Museum was realized in 2016 with the aim to bring this museum to international repute and to be the hallmark of the progress made by Indian Navy. The Naval Engineering Museum is the only one of its kind in the country depicting the evolution of marine propulsion. The prominent changes in the latest avatar of the museum are as follows:–

The main entrance of the museum has seen a major transformation from being a humble shutter door in 1990 to a grander cemented entrance with a wooden door in 2003 to now being a fine teak wood antique canopy-like structure. The entrance has truly grown taller and majestic and is one of the major highlights of this museum. 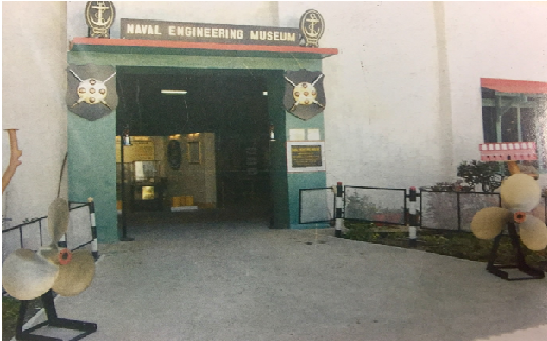 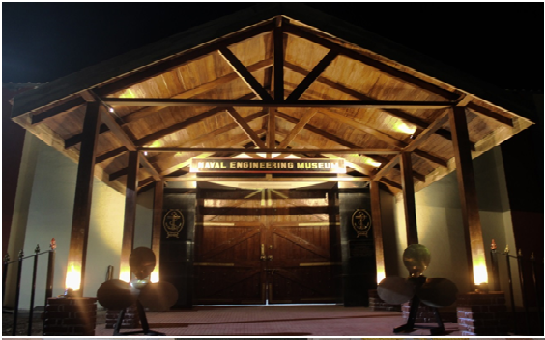 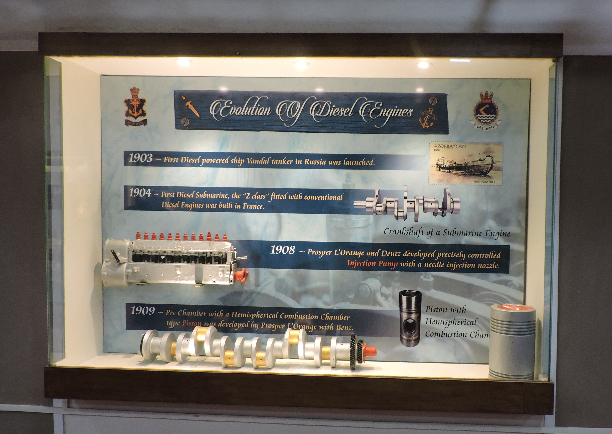 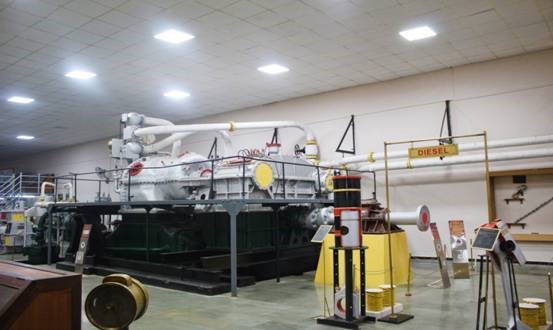 The Museum was registered under Society Registration Act (1860) as the Naval Engineering History Society (NEHS). The purpose of the museum remains to protect and promote the interests of Naval Marine Engineers. The magnificent NEHS crest has in the backdrop, the Admiralty 3 Drum Boiler, which has been the backbone of the propulsion system in the yesteryears. 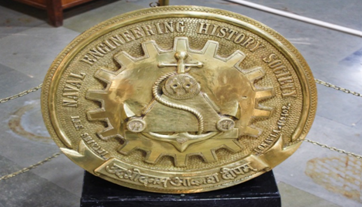 The various departments and trainers of this premier establishment have strived hard to provide the best technical training for years, so as to gear up the budding Marine Engineers in handling vintage as well as future technologies and platforms. It was therefore considered imperative to showcase the pride and history of achievements of this esteemed establishment and the men who have trained here. In its present form, the Motivation Hall preserves the rich heritage and instils a sense of belonging and in the process, inspires the Engineering fraternity to excel and set higher benchmarks for emulation and continuous improvement. Every important aspect/ activity performed in the station, be it training, infrastructure, adventure, honour and other activities of repute find a place in this Motivation Hall. 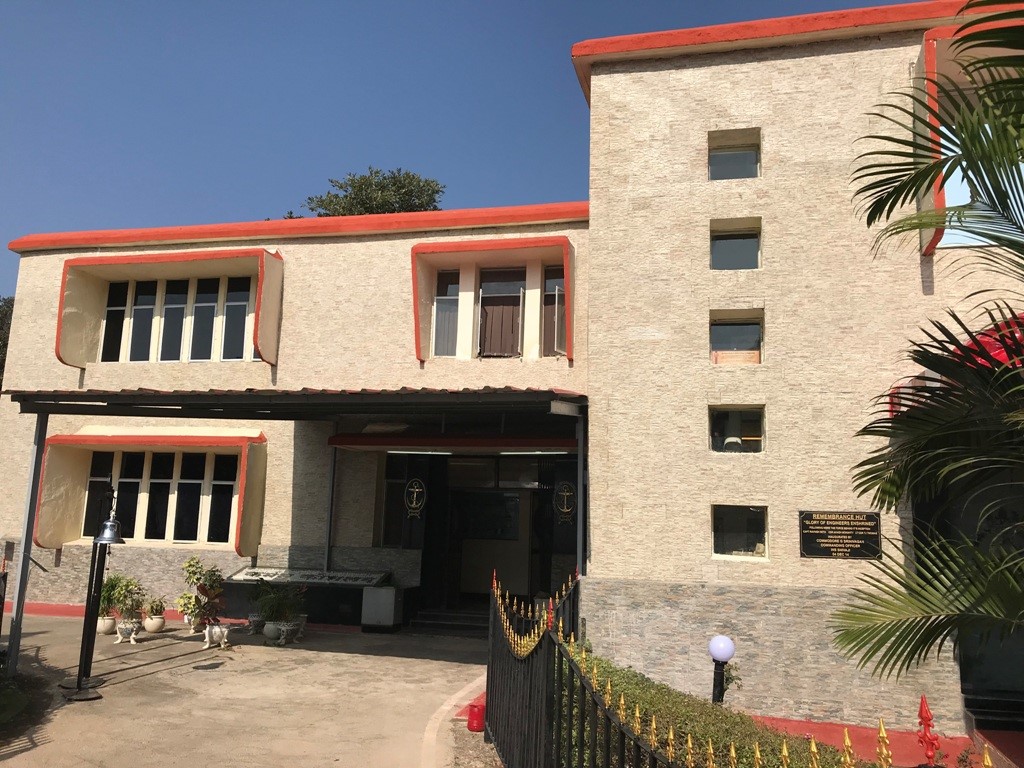 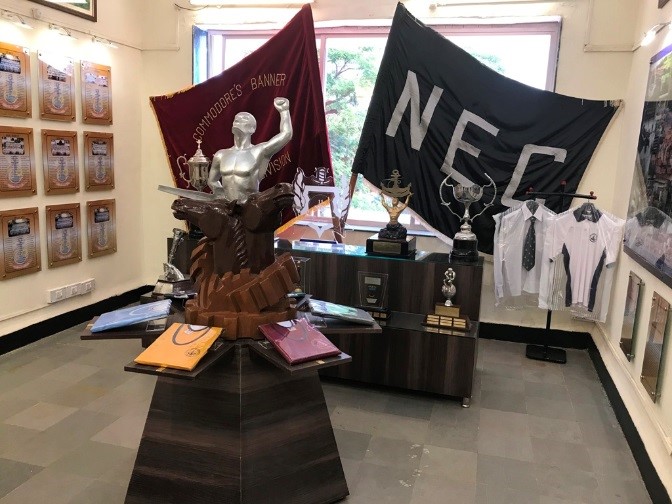 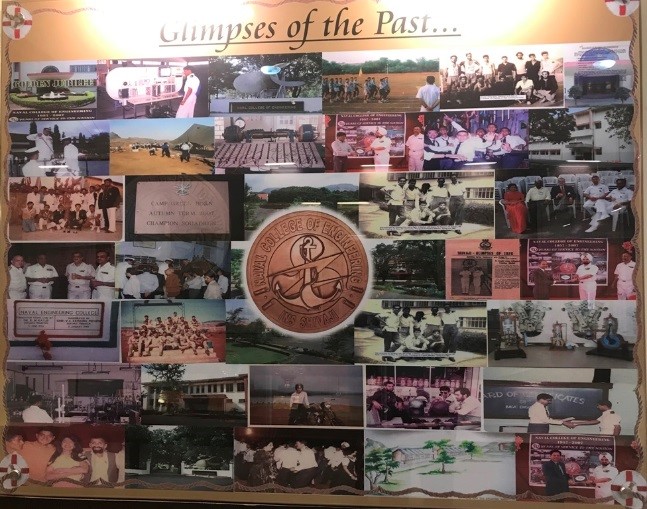 We stand tall on the shoulders of giants. The yesteryears of the Engineering Branch are replete with stories of men who epitomised the best through their zeal and industry. Their genius, vision and ultimate selfless sacrifice have propelled the growth and fueled the glory of the Indian Navy. This Remembrance Hut is dedicated to the memory of our illustrious predecessors and will serve to remind us of our holy duty to continue to strive for excellence in all our endeavours so that the Indian Navy surges on to greater heights and glory. This is an effort in offering our humble 'Shraddhanjali'’ to such a fine band of men. The Remembrance Hut enshrines our gratitude, prayers and never-ending recognition to the 'Marine Engineers/Technicians of Yesteryears' who served as a beacon, lighting up our path and inspiring us to confidently strive for a better tomorrow. 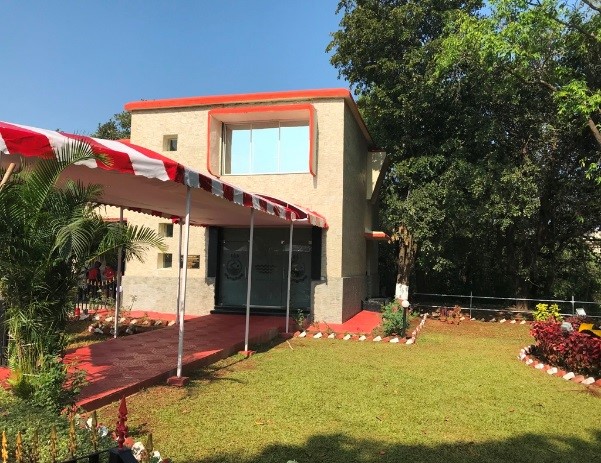 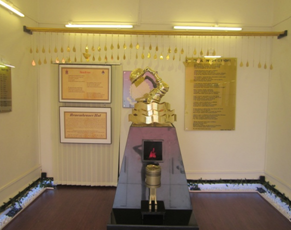