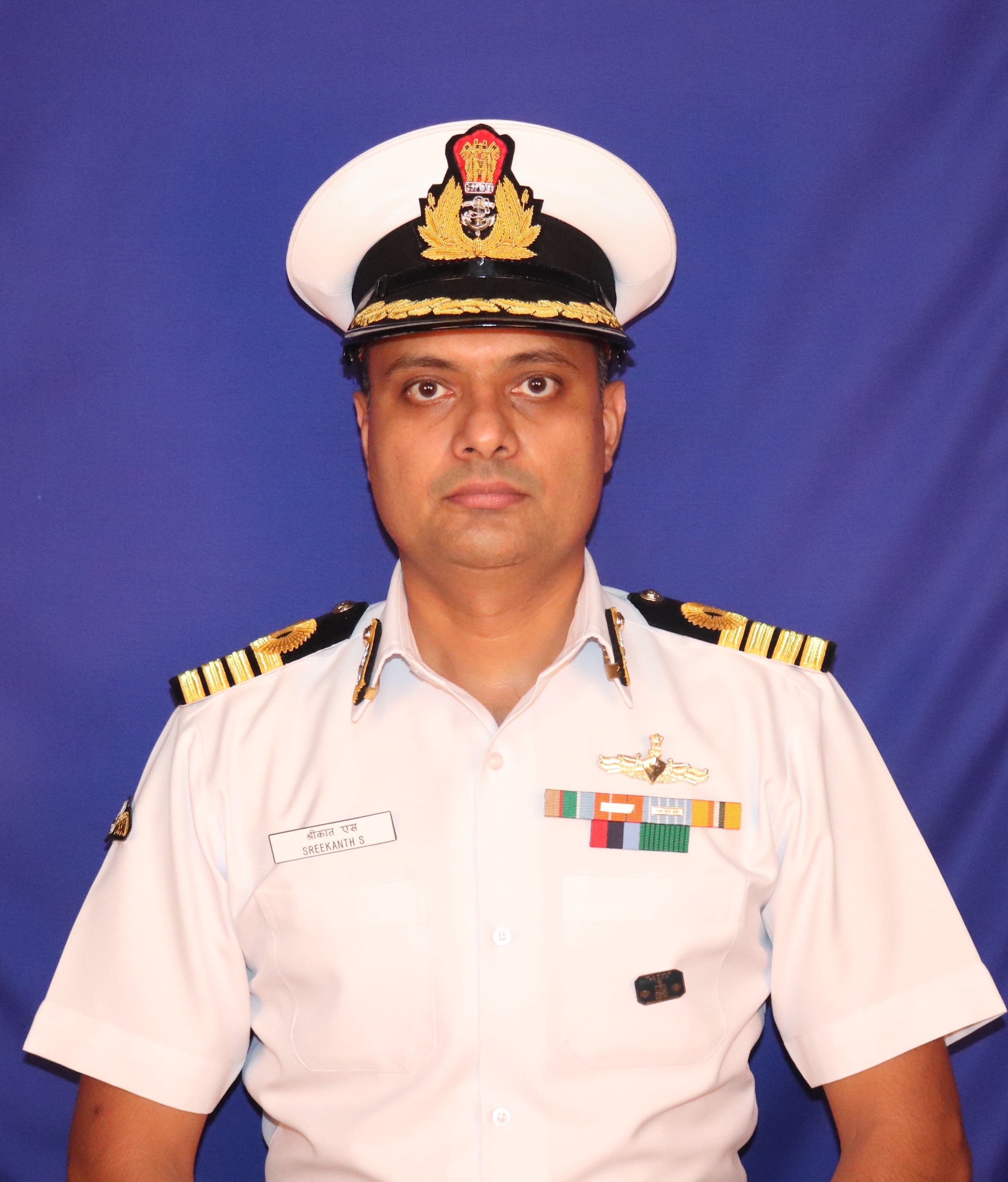 Captain S Sreekanth is an alumnus of 13th Naval Engineering Course. He was commissioned in the Electrical Branch of the Indian Navy on 01 Jan 2001. The officer during his career in the Indian Navy had tenanted appoints on board Indian Naval Ships INS Kirch, INS Nashak, INS Teg and INS Sahyadri. In addition the officer served in Yard billets at ND(Vizag) and NSRY(Kar), shore billets at Directorate of Information Technlogy and Software Engineering Group (Mumbai). The officer has completed M.Tech in computer science from IIT Madras. He has also undergone Technical Management Course from Naval War College and the prestigious Higher Defence Management Course from College of Defence Management, Secunderabad. The officer is an avid runner and a keen sportsman. He is married to Mrs. Praseetha, a home maker and has two sons.

Executive Officer is responsible for the following:-

Each of the above sub-departments is headed by an Officer-in-Charge, who is directly responsible to the Executive Officer for the administration and execution of specific duties pertaining to his department.

The Commander Technical Services is entrusted with the responsibility of providing technical assistance for installation of equipment for training, efficient progress of civil works, maintenance and optimal availability of Motor Transport, Electrical and Engineering equipment of the Establishment. The emphasis is to provide services so as to enhance training effectiveness and the quality of life by efficiently administering the following:-

The thrust of the Department has been to develop the infrastructure of the Establishment in tandem with technology, improve the habitability & hygienic conditions and enhance the quality of life of personnel. To achieve this aim the department takes up upgradation of assets required for training, improvement of existing infrastructure, improvement in overall living condition, upgradation of sports and recreational facilities. It also carries out planned preventive maintenance of existing assets of the Establishment in a phased manner.

The Logistics Department is headed by the Logistics Officer.He is assisted by his team which consists of DLOGO who in turn is being assisted by ALOGO, (Pay and Budget).ALOG,(Naval Stores).ALOGO, (Victualling) and ALOGO, (Clothing). At present there are 109 sailors under different ranks and designation,working with the department. The history of Logistics department dates back to the times since the inception of Valsura itself. Since then it has been doing a wonderful job and catering to all the Officers and Sailors of INS Valsura.

The Logistics department forms the backbone of every organisation. No ship can remain fighting fit if its logistics capabilities are lacking. The logistics department provides with a host of facilities.This ranges from meeting the ration requirements of all the personnel stationed at INS Valsura which also includes the families of the married personnel. The department also runs three in number gallies which includes the central galley,wardroom mess galley and the DSC galley. In addition to these the department undertakes all pay related issues,maintains clothing, naval and victualling stores.

There have various achievements of the logistics department. The notable ones amongst them are as follows:

The Education Department carries out general educational duties. The major responsibilities of the department include functioning as Naval Recruitment Establishment (NRE), maintenance of Library, Ships Information Room, Hobbies Club, Naval KG, Implementation of Official Language, Conduct of Educational Exams, Coaching Classes, Co-ordination of ACC Scheme, CD/PM/SCE exam, and management of Valsura Printing Press. By virtue of the role of the establishment as an NRE the department undertakes all activities in respect of recruitment of SSRs (earlier MERs), Artificer Apprentices and DEDH. In addition, the Senior Education Officer is entrusted with the duties of Chairman’s nominee in the Management Committee of KV Valsura and has an additional responsibility in terms of the Administration, Financial, and Educational aspects, including admissions, civil/maintenance works, appointment of teachers etc. of the Vidyalaya. Education Department is also responsible for Public Relation, responsible for liaisoning with the local print and electronic media so as to project the best image of the Navy and the establishment. Propagation of general education amongst the families and children of naval and civilian personnel of the establishment is an additional thrust area of the department. The libraries of the Family Welfare Centre, 2M DET and sickbay are being augmented by the department.

The role of Project Division (PD) is to foresee, examine, assess, design and implement new projects to enhance the efficiency of both Training as well as Administrative departments and thus the efficiency of the organization as a whole. In addition, this department provisions and procures various IT related hardware and software. Project Division is the nodal agency for management of IT resources of the entire establishment. The network Control centre for INS Valsura Campus Area network is located in the department. The department ensures maximum uptime of the server farm hosting all the IT related services to meet the requirements of the users on the network. The defect rectification and management of this vast network is totally undertaken in-house by the department.

Achievements of the department:

The role of medical department is to ensure physical and mental well being of the population of INS Valsura and other additional units.The population being provided medical cover has gradually increased from a meagre 250 in 1957 to over 4000 at present. Of these approximately 3500 comprise service personnel and their families, while the remaining consist of MES and other civilian employees residing in the base or living outside the base. While the magnitude of work has increased, the basic role primary health care remains unchanged.