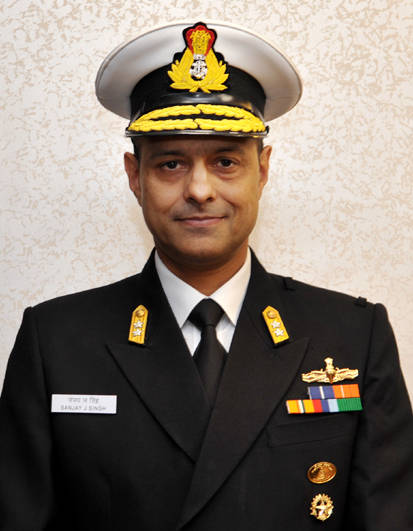 Rear Admiral Sanjay Jasjit Singh has assumed charge as the Assistant Chief of Naval Staff (Communication Space and Network Centric Operation) on promotion to the rank of Rear Admiral on 19 November 2015. The post was created in 2013 to accord focus to the Indian Navy’s drive towards networked operations and utilisation of space-based assets.

He is the second officer to hold the post and takes over from Rear Admiral Kishan K Pandey who has moved as the Flag Officer Fleet Review, in charge of planning for the forthcoming prestigious International Fleet Review to be hosted by the Indian Navy at Visakhapatnam in February 2016.

Rear Admiral Sanjay Jasjit Singh is a third-generation armed forces officer. An alumnus of the National Defence Academy, Khadakvasla, he always excelled during training. Adjudged as the Best Naval Cadet at NDA, he was awarded the Binoculars as the Best Sea Cadet and the coveted Sword of Honour as a Midshipman. Commissioned on 01 July 1986, the officer is a specialist in Navigation and Direction course, which he topped, in 1992. He also underwent the Advanced Command and Staff Course at UK, in 2000, where he was the Best Overseas Student amongst Army, Navy and Air-Force officers from 47 countries. He has also undergone the Naval Higher Command Course at Naval War College, Mumbai, and the National Security Strategy Course at the National Defence College, Delhi.

He has held a range of command, training and staff appointments, and has served on most classes of ships of the Indian Navy. His sea command appointments include command of the ASW and UAV-control frigate INS Taragiri, where he was awarded the Nao Sena Medal for his high performance, and the multi-role frigate INS Trishul. His training appointments include officer-in-charge of the Local Work Up Team, responsible for Operational Sea Training of ships, and the Navigation Direction School, his alma mater. In his staff appointments, he has served as the Joint Director of Personnel, Indian Naval Attaché at Iran, Principal Director of Naval Operations and, till recently, the Principal Director Strategy, Concepts and Transformation, wherein he was responsible for drafting the revised Indian Maritime Security Strategy and the Strategic Guidance to Transformation, both of which were released recently.

A keen swimmer and avid reader, he has written regularly on defence and strategic issues. He was earlier the lead drafter for the Indian Navy’s Maritime Doctrine, for which he was awarded Commendation by the Chief of the Naval Staff. He has completed several post graduate study programmes, including MA (History) and MPHIL (Arts) from Mumbai University, MA (Defence Studies) from Kings College, London, and MSc and MHIL (Defence and Strategic Studies) from Madras University. He is married to Zarine Lord Singh, a former leading fashion model and successful home-maker, who comes from a family of acclaimed musicians. The couple have two children.