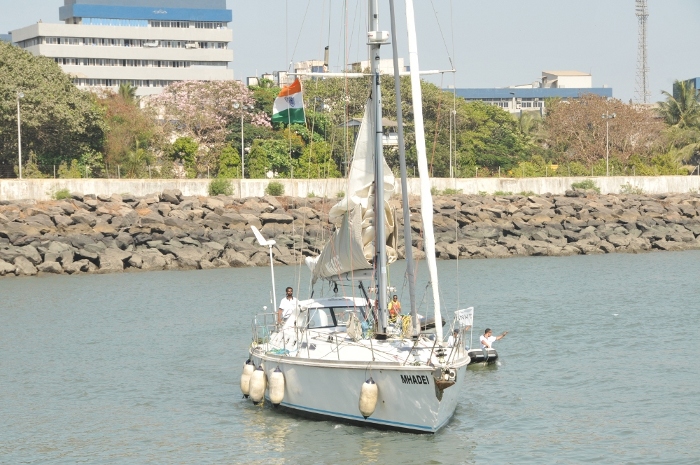 On April 6, 2013, Indian Navy’s Lt Cdr Abhilash Tomy wrote a new chapter in India’s rich Maritime history by becoming the first Indian to Circumnavigate the Earth under sails - solo, nonstop and unassisted. He had set sail out of Mumbai on November 1, 2012 in the sail boat INSV Mhadei to undertake a voyage no Indian had attempted before and few had dreamt of. In fact, so far, less than 80 people in the world have successfully completed such a voyage. The enormity of the feat can be gauged by the fact that in comparison, over 500 people have been to Space and over 5000 have climbed Mt Everest. 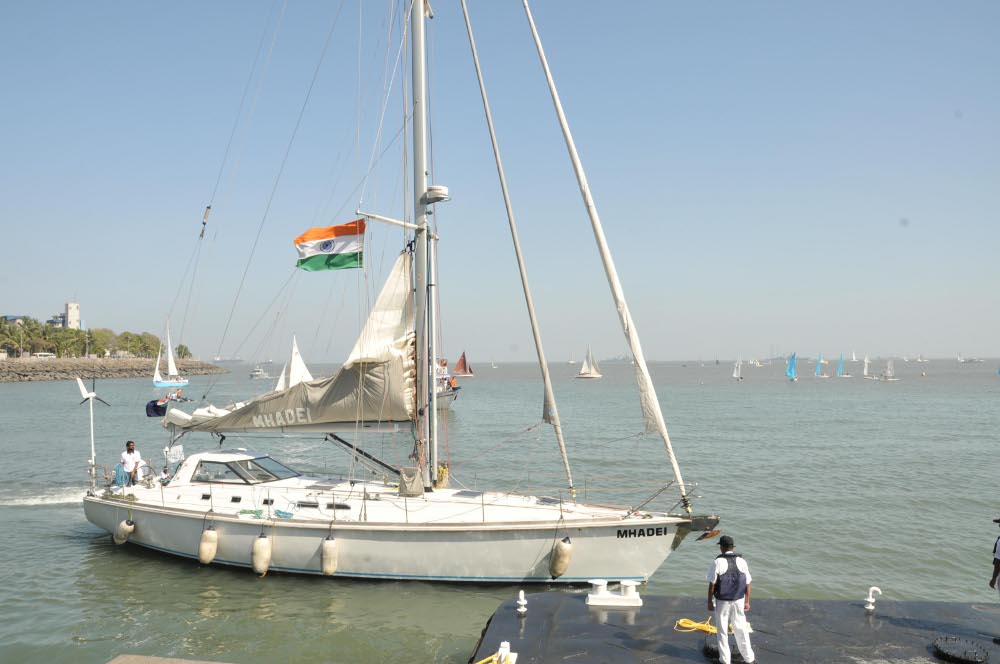 Touching the Gateway of India after five months of nonstop sailing

Overcome by emotion, and upon being received by the President himself, Abhilash Tomy said, his voyage was a fulfilment of 14 years of dream and 4 years of hard preparation. He thanked his mentors Vice Admiral M P Awati (Retd) and Cdr. Dilip Dhonde and also the builders of INSV Mhadei – Ratnakar Dandekar of Goa. 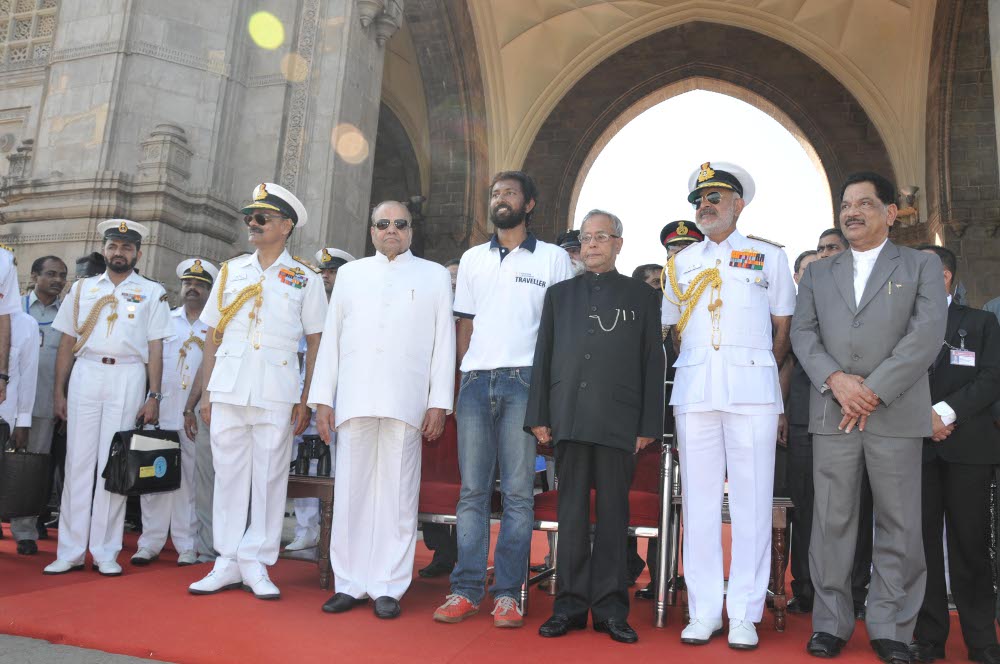 Speaking on the occasion President Pranab Mukherjee said “this achievement of Lt.Cdr Abhilash Tomy will be a source of inspiration for future generations of young seafarers. His epic voyage has placed our nation into the ranks of few select countries, whose citizens have been successful in braving such arduous voyage.”

President Mukherjee said “battling wave heights of 9-10 metres and wind speeds in excess of 100 kmph can be an extreme test of endurance. The solitude factor alone is such that being thousands of kms away from the nearest land, with very little chance of help coming by if something went wrong, requires courage, determination and grit of the highest order.” 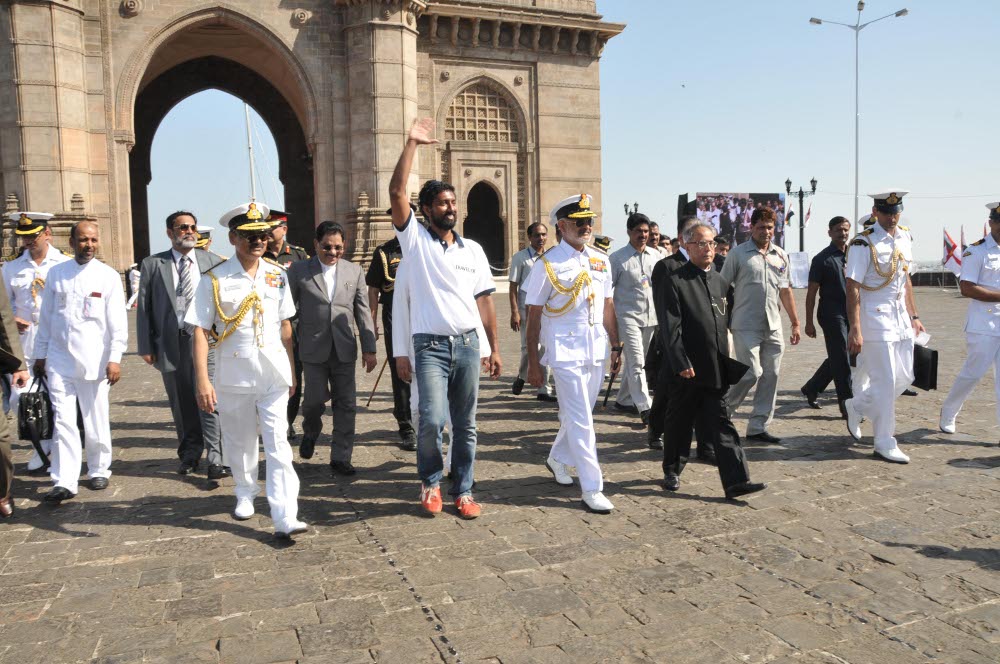 President expressed concern over sponsorship of terrorism through non-state actors. He said “ our commitment to peace stems not from weakness, but is based on mature understanding that peace alone can help a nation achieve its objectives of social and economic development. Stating that the nation’s social and economic well being is intricately linked to the seas, Pranab Mukherjee said, our resolve to achieve sustained high growth can be realized only if our maritime frontiers and assets are safe and act as enablers. “Our country’s security situation predicates that the Indian Navy plays a leadership role” he added. 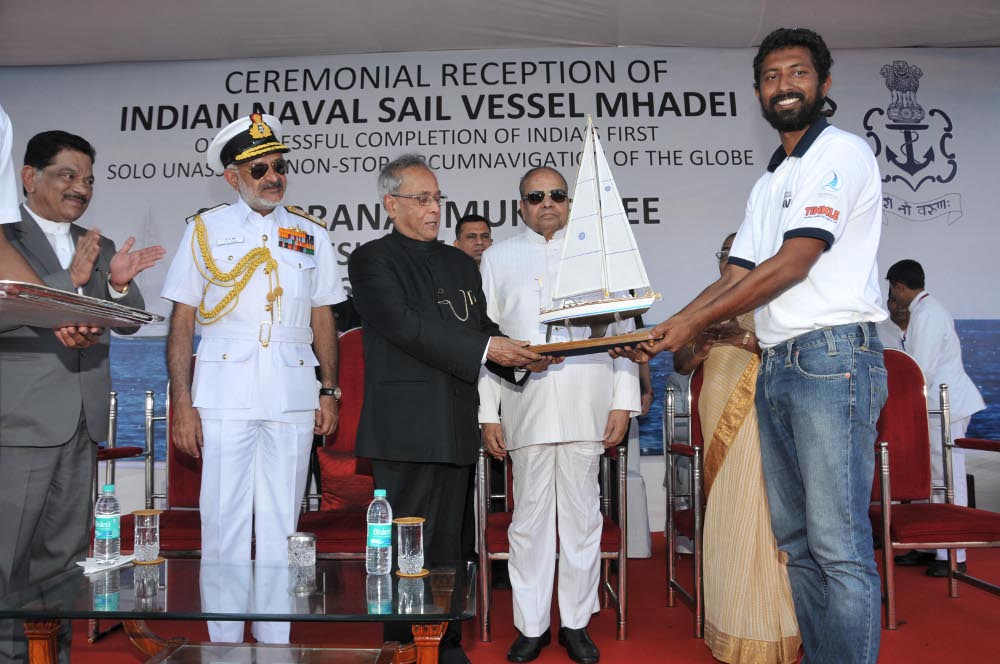 The Presidential address was followed by Hornpipe Dance by the Sea Cadet Corps and an impressive display of Continuity Drill by NauVeers of the Western Naval Command.

The entire voyage Abhilash Tomy of approx 22 thousand nautical miles, crossing the Indian, Southern, Pacific and Atlantic Oceans was done using sails and the power of the wind, without touching any Port and without any outside assistance. His route, from West to East, took him South of the continents of Australia, South America and Africa, thus rounding the three ‘Great Capes’; Cape Leeuwin in Australia, Cape Horn in South America and Cape of Good Hope in Africa.

He crossed the International Date Line on 31 Dec 12, becoming the first Indian to usher in the year 2013 and also the last Indian to get in the year 2013, having had to reset his calendar on crossing the Date Line! On 26 Jan 13, he unfurled the Indian Flag off Cape Horn, the farthest anyone was unfurling it that year! During the voyage, he had to weather temperatures from 4 to 40° C, often battling winds of over 125 Kmph and 10 meter high waves. At times he was over 4000 Km from the nearest land, all alone with only his trustworthy boat and indomitable spirit to rely on.

Abhilash’s only companion on this historic voyage was his boat, the Mhadei. She was custom built for the Indian Navy, on the banks of her namesake river in Goa in 2009, by Mr Ratnakar Dandekar of Aquarius Fibreglas Pvt Ltd. A 56 ft ‘Sloop’ built out of wood core fibreglass; she is the perfect example of the quality that can be achieved by Indian boat builders, this being her second Solo Circumnavigation in a brief life of 04 years.

The intrepid skipper Abhilash Tomy and his iconic boat are proud symbols of a resurgent Maritime India. They have, by their deeds, displayed what Indians are capable of achieving.