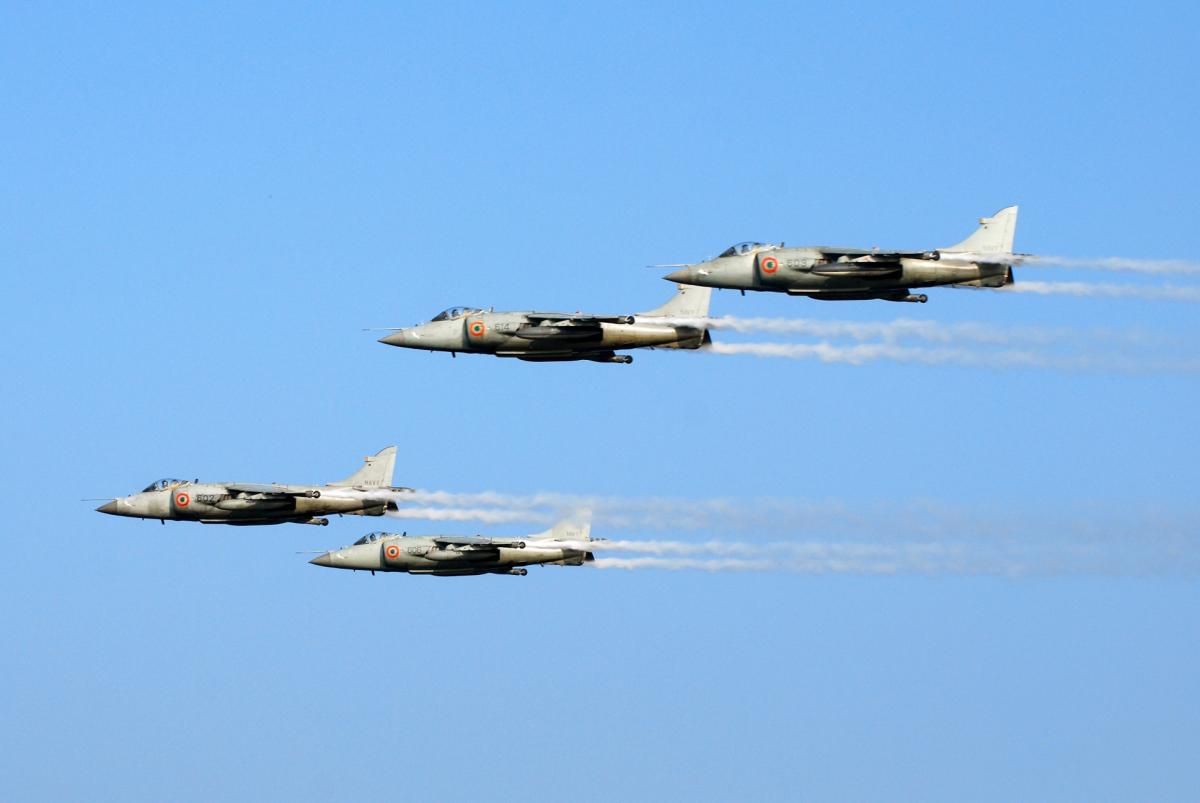 Morning of 11 May 2016 will be a monumental day in the history of Naval Aviation of India as the Indian Naval Air Squadron 300 (INAS 300), ‘White Tigers’, are set to phases out the Sea Harriers fighter aircrafts and make way for new generation of fighters in lieu. The INAS 300 will thereafter induct the MiG 29K/Kub fighters. The Sea Harriers are planned to be given a hero’s send off during a ceremony presided over by Admiral RK Dhowan, Chief of Naval Staff, at INS Hansa, Dabolim, Goa. Traditional Change of Command ceremonies will be held where Commander Shikhu Raj, a Sea Harrier pilot, hands over the command of the squadron to Captain KHV Singh, a MiG 29K pilot. The ceremony will also include an air display by Sea Harriers and MiG 29Ks which will mark the last flight of the Sea Harriers in the Indian Navy. A large number of serving and retired Sea Harrier Pilots are expected to attend the function.

Post phasing out of Seahawk fighters from the Indian Navy in 1978, the Navy trained its sight on the S/VTOL Harrier being developed by the British Aerospace. In November 1979, post government approval, Naval HQ placed an order for 06 Sea Harrier FRS Mk 51 fighters and 02 T Mk 60 Trainers. Inducted in the year 1983 the Sea Harriers have dominated the sky at sea protecting the Fleet from prying eyes of foreign Long Range Maritime Patrol Aircrafts. The first three Sea Harriers, landed at Dabolim on 16 December 1983. This was followed by the first deck landing on the carrier, INS Vikrant, on 20 Dec 1983 and the arrival of the first Sea Harrier T Mk 60 trainer, on 29 Mar 1984.

INS Viraat with the compliment of fighters

Designed and Manufactured by British Aerospace, Sea Harrier is a naval Short/Vertical Take-Off and Landing (VSTOL) Jet Fighter, Reconnaissance and Strike aircraft.  It first entered service with the Royal Navy in April 1980.  Its ability of vertical takeoff and landing is the most unique feature of this fighter. It featured a single Rolls-Royce Pegasus turbofan engine with two intakes and four vectorable nozzles producing 21500 pounds of thrust propelling the fighter at approximately 635 Knots. The fighters were capable of Air to Air Refueling to operate at extended ranges. The Sea Harrier operated from both INS Vikrant and INS Viraat where use of the ski jump allowed the aircraft to take off from a short flight deck with a heavier load than otherwise possible, although it can also take off like a conventional loaded fighter without thrust vectoring from a normal airport runway.

Unusual in an era in which most naval and land-based air superiority fighters were large and supersonic, the principal role of the subsonic Sea Harrier was to provide air defence to naval fleet by operating from their aircraft carriers. The Sea Harrier is equipped with four wing and one fuselage pylons for carrying weapons and external fuel tanks in addition to two removable 30 mm Aden Gunpods on the fuselage. The Sea Harriers were also equipped with the Matra Magic II and Derby Air to Air Beyond Visual Range (BVR) Missiles which makes the Sea Harrier a potent air defence fighter for the fleet at sea. The Sea Harrier was fitted with anti-ship Sea Eagle missile providing the best stand-off range anti ship capability to the fleet. In addition, the fighters were also capable of firing rockets and dropping bombs in shore bombardment role or in action against lightly armed ship.

The aircrafts were operated by Indian Navy and Royal Navy. The squadron was deployed during Operation Vijay and embarked on the carrier during Operation Parakram providing the essential offensive posture to the country and ensuring readiness to react to any escalation by the enemy. In addition to participating in numerous Naval exercises within the country, these fighters have also participated in large number of multinational exercises. As part of the Royal Navy, Sea Harriers have served in the Falklands War, both of the Gulf Wars, and the Balkans conflicts, on all occasions it mainly operated from aircraft carriers positioned within the conflict zone. Its usage in the Falklands War (1982) was its most high profile and important success, where it was the only fixed-wing fighter available to protect the British Task Force over 8000 miles from homeland.

The fighters were de-inducted from the Royal Navy in the year 2006. The fighters operated for the last time from INS Viraat on 06 March 2016.