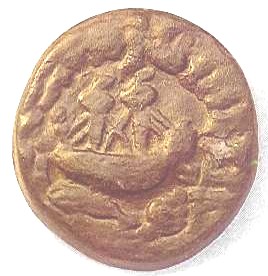 India's maritime history predates the birth of western civilisation. The world's first tidal dock is believed to have been built at Lothal around 2300 BC during the Harappan Civilisation, near the present day Mangrol harbour on the Gujarat coast.

Malan ni pothi. 19th century Kutchi mariner's log bookThe Rig Veda, written around 2000 BC, credits Varuna with knowledge of the ocean routes commonly used by ships and describes naval expeditions which used hundred-oared ships to subdue other kingdoms. There is a reference to Plava, the side wings of a vessel which give stability under storm conditions: perhaps the precursor of modern stabilisers. Similarly, the Atharva Veda mentions boats which were spacious, well constructed and comfortable.

In Indian mythology, Varuna was the exalted deity to whom lesser mortals turned for forgiveness of their sins. It is only later that Indra became known as the King of the Gods, and Varuna was relegated to become the God of Seas and Rivers. The ocean, recognised as the repository of numerous treasures, was churned by the Devas and Danavas, the sons of Kashyapa by queens Aditi and Diti, in order to obtain Amrit, the nectar of immortality. Even today the invocation at the launching ceremony of a warship is addressed to Aditi. 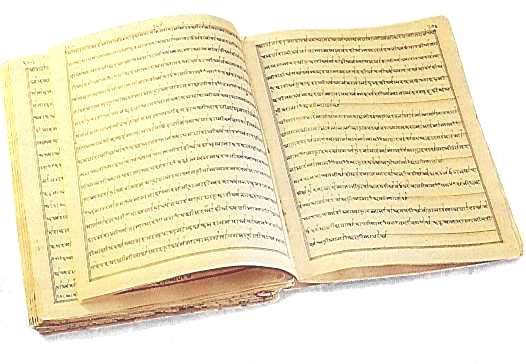 The influence of the sea on Indian kingdoms continued to grow with the passage of time. North-west India came under the influence of Alexander the Great, who built a harbour at Patala where the Indus branches into two just before entering the Arabian Sea. His army returned to Mesopotamia in ships built in Sind. Records show that in the period after his conquest, Chandragupta Maurya established an Admiralty Division under a Superintendent of Ships as part of his war office, with a charter including responsibility for navigation on the seas, oceans, lakes and rivers. History records that Indian ships traded with countries as far as Java and Sumatra, and available evidence indicates that they were also trading with other countries in the Pacific and Indian Oceans. Even before Alexander there were references to India in Greek works, and India had a flourishing trade with Rome. The Roman writer Pliny speaks of Indian traders carrying away large quantities of gold from Rome, in payment for much-sought exports such as precious stones, skins, clothes, spices, sandalwood, perfumes, herbs and indigo.

Trade of this volume could not have been conducted over the centuries without appropriate navigational skills. Two Indian astronomers of repute, Aryabhatta and Varahamihira, having accurately mapped the positions of celestial bodies, developed a method of computing a ship's position from the stars. A crude forerunner of the modern magnetic compass was being used around the fourth or fifth century AD. Called Matsya Yantra, it comprised an iron fish that floated in a vessel of oil and pointed North.

Between the fifth and tenth centuries AD, the Vijaynagaram and Kalinga kingdoms of southern and eastern India had established their rule over Malaya, Sumatra and Western Java. The Andaman and Nicobar Islands then served as an important midway point for trade between the Indian peninsula and these kingdoms, as also with China. The daily revenue from the eastern regions in the period 844-848 AD was estimated at 200 maunds (eight tons) of gold. In the period 984-1042 AD, the Chola kings despatched great naval expeditions which occupied parts of Burma, Malaya and Sumatra, while suppressing piracy by the Sumatran warlords. In 1292 AD, Marco Polo described Indian ships as " ...built of fir timber, having a sheath of boards laid over the planking in every part, caulked with oakum and fastened with iron nails. The bottoms were smeared with a preparation of quicklime and hemp, pounded together and mixed with oil from a certain tree which is a better material than pith."

A fourteenth century description of an Indian ship credits it with a carrying capacity of over 100 people, giving a fair idea of both the shipbuilding skills and the maritime ability of seamen who could successfully man such a large vessel. Another account of the early fifteenth century describes Indian ships as being built in compartments so that even if one part was damaged, the rest remained intact, enabling the ship to complete her voyage — a forerunner of the modern day subdivision of ships into watertight compartments; a concept then totally alien to the Europeans.

The crest of the second "Cornwallis"

The decline of Indian maritime power commenced in the thirteenth century,andIndian sea power had almost disappeared when the Portuguese arrived in India. The latter imposed a system of licence for trade, and set upon all Asian vessels not holding permits from them. A Naval engagement in Bombay Harbour in 1529 resulted in Thana, Bandora and Karanja agreeing to pay tribute to the Portuguese, and a grand naval review was held by them in 1531. They took complete control of the harbour in 1534 and finally ceded it to the British in 1662, under a treaty of marriage between Charles II and Infanta Catherine of Braganza.

The piracy by the Portuguese was challenged by the Zamorin of Calicut when Vasco da Gama, after obtaining permission to trade, refused to pay the customs levy. Two major engagements were fought during this period. The first, the Battle of Cochin in 1503, clearly revealed the weakness of the Indian navies and indicated to the Europeans an opportunity for building a naval empire. The second engagement off Diu in 1509 gave the Portuguese mastery over Indian seas, and laid the foundation of European control over Indian waters for the next 400 years.

Indian maritime interests witnessed a remarkable resurgence in the late seventeenth century, when the Sidis of Janjira allied with the Moghuls to become a major power on the West Coast. This led to the Maratha King Shivaji creating his own fleet, commanded by able Admirals like Sidhoji Gujar and later Kanhoji Angre. This Maratha fleet along with the legend of Kanhoji held sway over the entire Konkan Coast, keeping the English, Dutch and Portuguese at bay. The death of Angre in 1729, left a vacuum in leadership, and this resulted in the decline of the Maratha sea power.

Despite the eclipse of Indian kingdoms with the advent of western domination, Indian shipbuilders continued to hold their own well into the nineteenth century. Ships displacing 800 to 1000 tons were built of teak at Daman and were superior to their British counterparts both in design and durability. This so agitated British shipbuilders on the River Thames that they protested against the use of Indian-built ships to carry trade from England. Consequently active measures were adopted to cripple the Indian industry. Nevertheless, many Indian ships were inducted into the Royal Navy, such as HMS Hindostan in 1795, the frigate Cornwallis in 1800, HMS Camel in 1806 and HMS Ceylon in 1808. HMS Asia carried the flag of Admiral Codrington at the Battle of Navarino in 1827 — the last major sea battle to be fought entirely under sail.

Treaty of Nanking being signed onboard 'Cornwallis' on 29 Aug 1842Two Indian-built ships witnessed history in the making: the Treaty of Nanking, ceding Hong Kong to the British, was signed on board HMS Cornwallis in 1842, whilst the national anthem of the United States of America, "The Star Spangled Banner," was composed by Francis Key on board HMS Minden when the British ships were at war and attempting to reduce Fort McHenry in Baltimore, Maryland.

Numerous other ships were also constructed, the most famous being HMS Trincomalee, which was launched on 19 October 1817, carrying 46 guns and displacing 1065 tons. This ship was later renamed Foudroyant, and is reputed to be the oldest ship afloat built in India.

The Bombay Dock was completed in July 1735 and is in use even today. The period of 4000 years between Lothal and Bombay Dock, therefore, offers tangible evidence of the seafaring skills the nation possessed in the days of sail. Thus, in the early seventeenth century, when British naval ships came to India, they discovered the existence of considerable shipbuilding and repair skills, and a seafaring people—an ideal combination for supporting a fighting force.