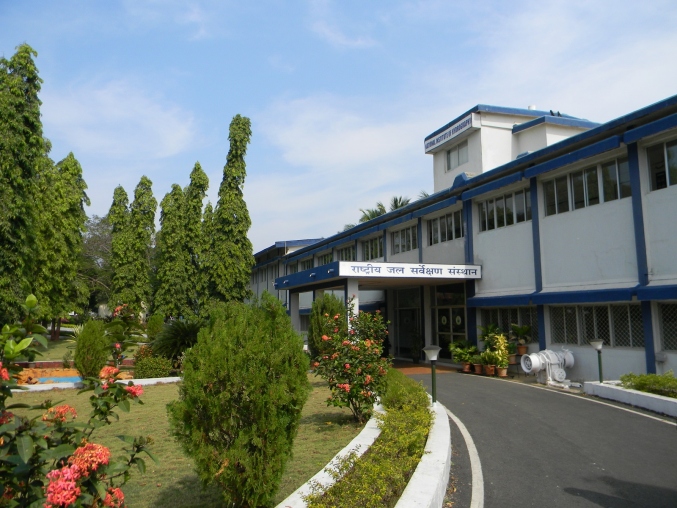 Training in hydrography had been conducted onboard surveying vessels until the establishment of a Hydrographic School at INS Angre, Bomabay (now Mumbai) in 1959. The first attempt to provide systematic training of Officers and Sailors in Hydrography began with the establishment of a Hydrographic Training Unit at Bombay in 1959 and shift to Vendurithy at Cochin on 21 October 1961. For a short time, it operated from a temporary facility provided in the Gunnery School of Venduruthy. Subsequently, for most of its remaining stay in Cochin it operated from the Navigation Direction School.

The government sanction for a permanent establishment in Cochin was obtained in Apr 1965. Admiral J Cursetji, PVSM Chief of Naval Staff formely inagurated the Hydrogaraphic School at Goa on 29 Nov 1978. Situated on the picturesque Alpequeiros Hill at the scenic port town of Vasco-da-Gama, the school is idealy located to impart quality training in the field of Hydrography.

The Mormugoa Harbour bay, the surrounding coast with cliffs and short stretched of sandy beaches provides the ideal setting for training in Hydrography. It was fully equipped to meet the training requirement of various Naval Officers, Sailors, Civilians from the Indian maritime states, Survey organisations, Major port trusts, Ministry of Shipping and Transport, Survey launch pools, and other Hydrographic surveying agencies within and outside india with a major UND Paid. In 1980, the Hydrographic School was accorded the status of Regional training centre in Hydrographic survey for the Asian region. In May 1981, the second wing of the Hydrographic school was completed and in 1982 the school's Long H training programme and curriculum was recognised by the HO (International Hydrographic Organisation) as a Category 'A' course. This is the highest recogisatin of a Hydrograhic specialisation course by the International body on Hydrographic matters. In 1984, the Hydrographic school) was recognised as the regional Hydrgraphic training centre for Soth East Asian and African countries thus extending its reach to Africa and the South East Asian shores. In 1997, the Hydrographic school was awarded the Cat 'A' Certification by IHO for offering the Option II which deals with Industrial Offshore Surveying under Edition 7.0 of the standards of the IHO/FIG International Advisory Board. The school was the first in the world to offer this optional subject. The school was consequently re-designated as the National Hydrographic School in the light of the fact that it did provide training to Hydrographers from other National Maritime Organisations such as the Minor Port Survey Organisation, Port Trusts, Dredging Corporations of India, Inland Water Ways Authority of India besides the Naval fraternity of Hydrographers from both within India and abroad. In 1998, the Schools Cat 'A' Long Hydrographic Course, revalidated under the addition 8.0 of the standards of the IHO/FIG international advisory board was affiliated to the Goa university for the award of Masters Degree in hydrographic survey to the Long Hydrographic Course. In 1999, the IHO/FIG International Advisory Board awarded the CAT B certifications for Basic/free Hydrogrpahic Course conducted by the school, under Eddition 8.0 of the standards of IHO/FIG International Advisory Board. Thus both the professional Officers Courses conducted by the School had IHO recognisation by the year 1999. In the year 2000, the school was awarded the ISO 9001 certification. Three courses are being offered to the students of the littoral countries of the Indian Ocean RIM.

The Institute has trained 513 Indian Naval Officers and over 369 Officers from Abroad till the year 2017. In 2005, the sailors course was affiliated to the Cochin University of Science and Technology (CUSAT) for the Award of the Diploma in Hydrography on successful completion of PO Q course. Since its commissioning this school continues to be proficient in training all categories of personnel involved in the field of the hydrographic surveying. This initiative has been specially tailored for differentt categories of personnel from the National Hydrographic Departments, and other Maritime and Port Organisations, both from India and friendly foreign countries. Due to its sole National Position in Hydrographic training and International nature, the school was rechristened as National Institute of Hydrography (NIH) on 05 June 2009. Though, the Institute has grown leaps and bounds in National and Intemational forums, the Institute's committed staff continues to strives in pursuance of excellence. The Institute has a well stocked Library catering to the professional needs and also other general inters to imbibe good reading habits amongst the staff and trainees. The Library provides with interactive softwares for effective e-administration. A large number of professional magazines/Journals are subscribed by the library.