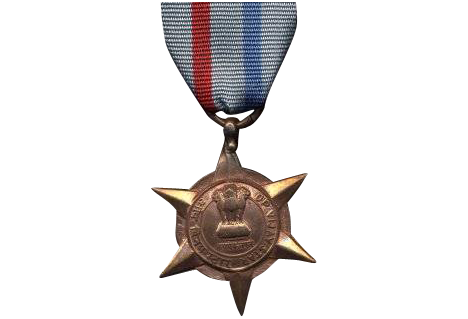 No. 116-Pres/2001 – The President is pleased to institute a medal for recognition of the services of Armed Forces personnel and civilians in the ‘OP VIJAY’ in 1999; and in this behalf, to make, ordain and establish the following ordinance

Firstly: The medal shall be styled and designated the “OP VIJAY STAR” (hereafter referred to as the medal).

Thirdly: The medal shall be worn suspended from the left breast by a silk Riband which shall be 32 mm in width. The Riband shall be divided into three equal parts of steel grey, with red and light blue stripes of 4mm each.

Fourthly The medal shall be awarded to all personnel of the following forces who participated in ‘OP VIJAY’ against the enemy in the area of conflict/operations on the ground, on the sea or in the air as specified below

Awarded to all personnel who of the following forces who participated in operations in and around Kargil on the ground, or in the air. The minimum qualifying service shall be one day in the Battle Zone/Air Fields or one operational sortie or a total of three flying hours as members of a crew in the battle zone

Awarded to all personnel of Navy who participated in the operations or remained in the maritime Battle zone. The minimum qualifying service shall be one day in the battle zone or one operational sortie or a total of three flying hours as member of the crew of Naval or Coast Guard aircraft, in the maritime zone. Paramilitary forces, which participated in the operation under the command of the Navy or in support of the Navy in Operation Vijay, will also be eligible.

Awarded to all Air Force personnel who operated from Srinagar, Awantipur, Leh, Thoise and Kargil or stayed in the battle zone for 10 days or more. In addition, all aircrew who flew at least one operational sortie or a min of 03 flying hours as member of crew in the battle zone, irrespective of the airfield of operation.

The Maritime Battle zone is defined as the sea area West of the Coast of Saurashira and Northwards from Latitude 20 deg 41 Min North and includes the coastal area upto one nautical mile landwards from Diu head to Jakhan Creek.

One operational sortie or 03 flying hrs in the Battle Zone irrespective of air fields.

Sixthly A person who wins a gallantry award or is mentioned in dispatches or dies or sustains wounds or other disabilities while in service in the specified areas irrespective of the time limit, shall be eligible for this medal. The period of detention as a prisoner of war shall count towards the qualifying service for the medal.

Seventhly It shall be competent for the President to cancel and annul the award of the medal to any person, and also to restore it subsequently.