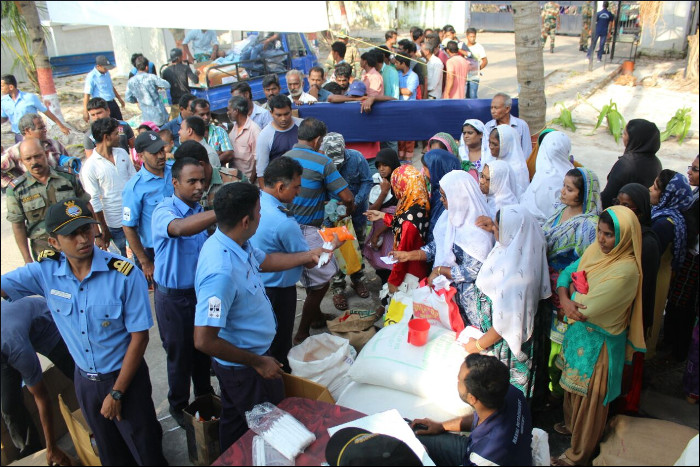 INS Jamuna provided fresh water in excess of 12000 Lts on 07 December 2017 at Kavaratti even as work is in progress to repair the damaged desalination plant. The ship would be providing fresh water to the island for next five days. INS Sharda reached Minicoy in the morning on 07 December 2017 with consignment of HADR material comprising fresh water, medicines, food, clothing and blankets. In addition, the ship had also carried other essentials like emergency lights, petrol, portable 10 KVA power generators, UPS, rechargeable torches, tarpaulin, electrical tool kits, boiler suits and a Public address (PA) system with speakers. However, the items could not be delivered today due to non availability of barge from Minicoy and these will now be delivered on 08 December 2017. 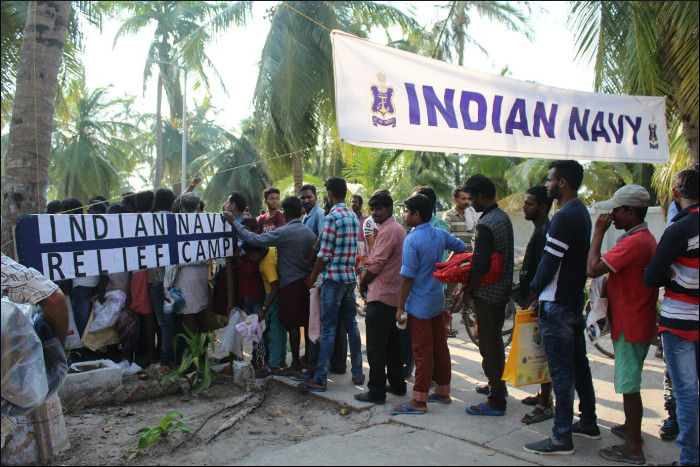 INS Shardul, while proceeding from Minicoy to Kochi encountered a stranded Singapore registered Tug “Bes Power” at 35 miles off Minicoy. The Tug was on passage from Oman to Maldives when it ran into bad weather due to cyclone ‘Ockhi’. The drifting vessel had exhausted its entire fuel. Shardul promptly transferred 45 tons of fuel for the Tug to continue its passage to Maldives.

INS Kalpeni, with six local fishermen embarked, undertook guided search for missing/ fishing vessels in distress for the second day at “Bassas de Pedro”, a traditional fishing area. The fishermen who embarked INS Kabra returned on completion of search that did not find any further fishing vessels in distress/ survivors. INS Kabra is continuing its planned search operations over Southeast Arabian Sea.

Normalcy is being restored on a war footing at Minicoy, with the naval contingent working 24X7. In addition, A relief camp was established to distribute the relief materials ferried by naval ships to all 11 villages through their ‘Moopans’ (village heads) as requested by the administration of Lakshadweep. Other maintenance activities such as clearing of fallen trees, cleaning of premises of jetty area, Navodaya School, relief camp and Fisheries department premises are being undertaken in full vigour by the naval personnel present there.

Based on information received about fishing boat with15 fishermen off Lakshadweep being in need of assistance, Coast Guard ship Abhinav approached the boat and provided it with fresh water and provisions. The boat has been identified as FB Thiru Churulai which is now proceeding towards Kochi on its own as it did not want any other assistance.

Earlier in the day two dead bodies were recovered by Coast Guard Ship Vaibhav about 100 nautical miles off Alappuzha which is being handed over at Vizhinjam. A total of 12 ships including two from Mumbai and two types of aircraft (Dornier fixedwing and Chetak helicopter) are being employed by the Coast Guard for the operations.