Hon’ble President  and the Supreme Commander of the armed forces of India, Shri Pranab Mukherjee, reviewed the Fleet comprising naval warships from Indian as well as frontline foreign  navies on 06 Feb 16. This was the eleventh Fleet Review after Independence and the second with participation of foreign navies. After a 21-Gun salute and ceremonial Guard of Honour, the President embarked INS Sumitra, an indigenously built Naval Offshore Patrol Vessel (NOPV) designated as the ‘Presidential Yacht’. The President was received by the Hon’ble Prime Minister Shri Narendra Modi, Hon’ble Raksha Mantri Shri Manohar Parrikar and Admiral RK Dhowan, Chief of the Naval Staff. On leaving harbor, the President’s Yacht weaved through the 70 ships at anchorage off Visakhapatnam port. A spectacular fly-past was conducted as a part of the static review of the Fleet. During the final stage of the review, a mobile column of warships and submarines carried out high speed steam past alongside the Presidential yacht. Addressing the Fleet during the Review, the Hon’ble President said that IFR 2016, while showcasing the prowess of the Indian Navy, has brought together navies from across the globe here on Indian shores, signifying our common desire to use the seas to promote peace, cooperation and friendship, as also to develop partnerships for a secure maritime future ( full transcript of the address by the Hon’ble President during the review is attached below). 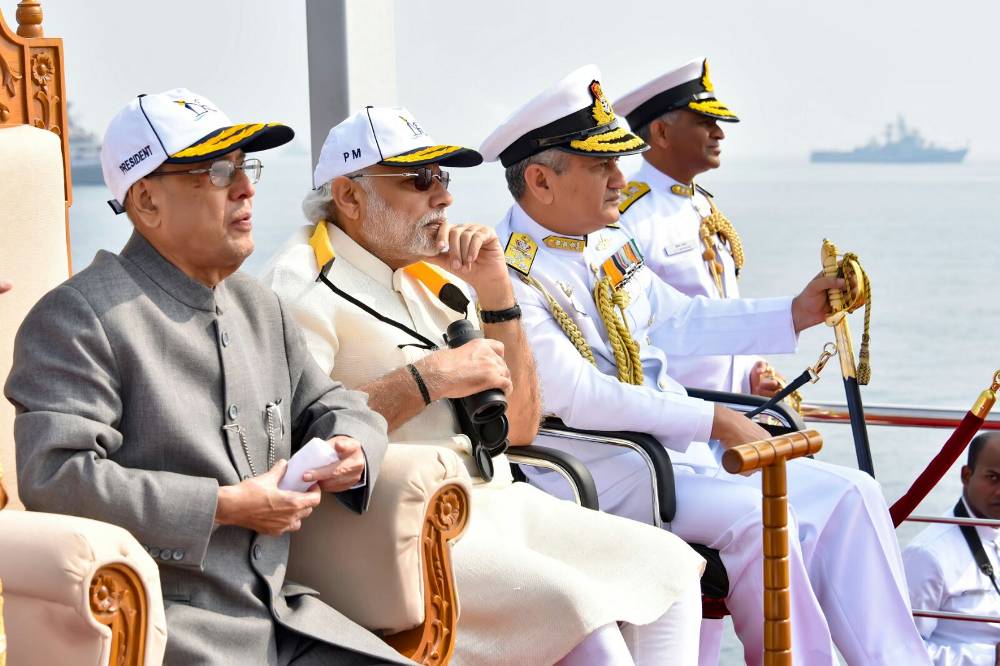 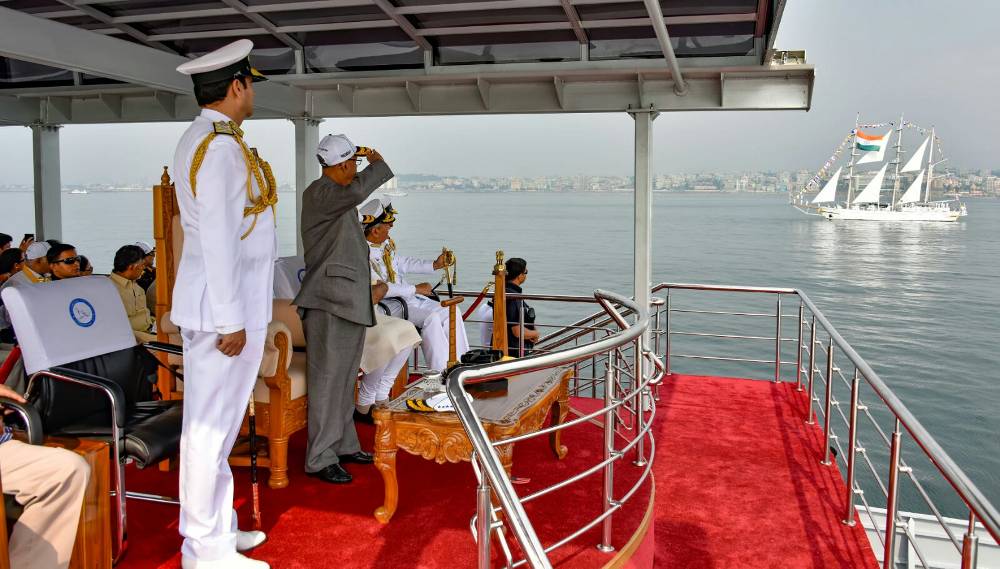 As the presidential yacht passed between the review anchor columns, each ship dressed in full regalia, saluted the President. Each ship was manned by her ship’s company, dressed in white ceremonial uniform. In a moment that stood still in time, white caps were doffed in unison in a grand salutation. The resounding sound of ‘Three Jais’ by the ships’ crew echoed over the waves symbolising the spirit of camaraderie and bonhomie across the seas.

Along the way, the Hon’ble President also witnessed demonstrations in the form of breathtaking fly-past by Naval Air Arm and a daring display by the elite Marine Commandos. The fly-past comprised 15 formations of 45 aircraft including two formations from the Indian Coast Guard. It also showcased the latest acquisitions of the Indian Navy such as MiG 29K, Long Range MR aircraft P8I and AEW helicopter KM-31.

It is indeed a privilege for me to have the splendid sight of majestic warships anchored in these waters of Bay of Bengal. The fluttering pennants and flags on the dressing lines, happy and proud men in white manning their ships is indeed heartwarming. I am privileged to be here today with all of you and review this imposing international parade of ships. 50 friendly navies have sailed across oceans and sent naval ships and/or delegations to participate in the first International Fleet Review on the East Coast of India at Visakhapatnam. On behalf of the Government, and the people of India, I extend a very warm welcome to all our foreign guests and thank you for honouring the invitation of our Indian Navy.

The navies world over have conducted Fleet Reviews to symbolise their loyalty, allegiance to the nation, and strengthen bonds between the sailors and the state. The International Fleet Review 2016 does that and much more. IFR 2016, while showcasing the prowess of the Indian Navy, has brought together navies from across the globe here on Indian shores, signifying our common desire to use the seas to promote peace, cooperation and friendship, as also to develop partnerships for a secure maritime future. Your presence in such large numbers has made this international event spectacular and truly reflects the spirit of this IFR, we are indeed ‘United through Oceans’. The waters that lap our coast also wash your shores, these great blue ‘COMMONS’ indeed link us to each other. IFR 2016 has enabled us to join hands and work together to secure our seas for the greater good of humanity and the world.

The navies of the world have a unique role in promoting goodwill, nurturing peace and tranquility of the oceans. Your ships and all personnel participating at this momentous fleet review are ambassadors of great nations that you represent. The message of friendship and goodwill of your people strengthens our belief in promoting peace, prosperity and stability for mutual co-existence and ensuring secure seas. I understand that your interactions during the past few days of your stay here have been exciting and you all are keenly looking forward to take part in passage exercises and will ‘sail together’ on completion of IFR.

India’s geographical location, astride the major shipping routes of the Indian Ocean, gives it a pivotal maritime role. Considering the globalised nature of today’s political and economic environment, it is our belief that the present day maritime domain requires navies across the world to re-focus their efforts to counter the rising tide of non-traditional maritime challenges in the brown, green and blue waters across all oceans. The Indian Navy, accordingly, has re-aligned its maritime strategy, to reflect the changes in the evolving global environment, and has established a credible record of cooperative initiatives to promote stability of the oceans, and played a central role in ensuring safety of the vital sea lines of communication, across the Indian Ocean.

My special compliments to the Indian Navy, especially the Eastern Naval Command, for the meticulous planning and flawless conduct of today’s splendid Fleet Review. An event of such magnitude could be organised only by the involvement and support of the people. May I thank and congratulate the Government of Andhra Pradesh and all citizens of Visakhapatnam for their cooperation.

I thank all naval ships and delegations assembled here for the Fleet Review to mark this historic occasion. I am confident that our guests from far and wide, will carry with them pleasant memories of the warmth and traditional hospitality shown by the people of India. I would urge that as you sail back to your homelands, carry with you our message of global peace and brotherhood, so that we can strengthen our bonds of friendship and secure a better maritime environment for future generations.