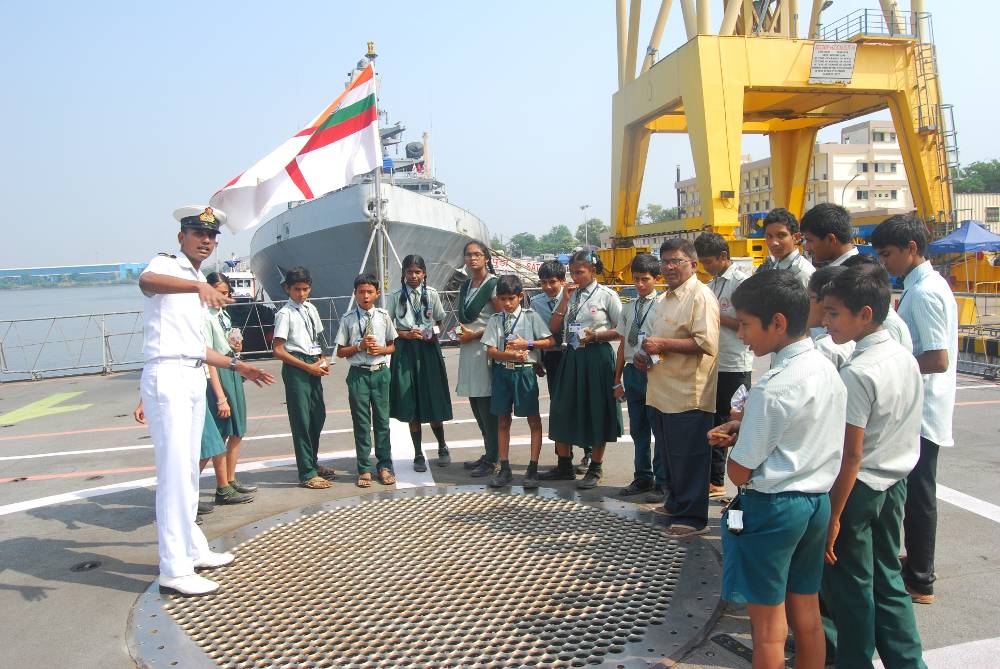 As part of its concerted efforts to reach out not only to the farthest oceans but also to the citizen’s hearths, the Eastern Naval Command had organized a ‘Special Children visit to Eastern Fleet Ship’ as part of its Navy Week Activities. 178 special children from 12 different schools from across Visakhapatnam visited the latest frontline warship, INS Kamorta on Friday, the 27 November 2015. Mrs Sandhya Thakre was the Chief Guest for the occasion.

The children were delightfully received onboard by the naval personnel and their families.  Besides getting an insight into the naval way of life, display of small arms and a guided tour of the ship.  The event witnessed active participation and enthusiastic response from all children, who came prepared with musical instruments and cultural costumes.  The extravaganza showcased the special talent of the special children with a spectacular display of song and music.

In the sidelines of Navy Week celebrations, two warships of the Eastern Fleet namely, INS Shivalik a front line Stealth Frigate and INS Jalashwa, an amphibious ship (Landing Platform Dock), were open to visit by school children over the past two days.  About 2500 students from 26 schools visited these ships and were taken on a guided tour and briefed about the diverse weapons and equipment fitted onboard the ships. Various naval evolutions and operations were explained to them by the means of photo boards and projection systems. Caps, flags and posters depicting naval way of life were distributed amongst the children during the visit. The children were also career counseling for those with an interest in joining the Navy. The visitors experienced life in the Navy from close quarters and considerable excitement was in evidence.