INSV Mhadei returns after Successful Completion of All Woman Expedition 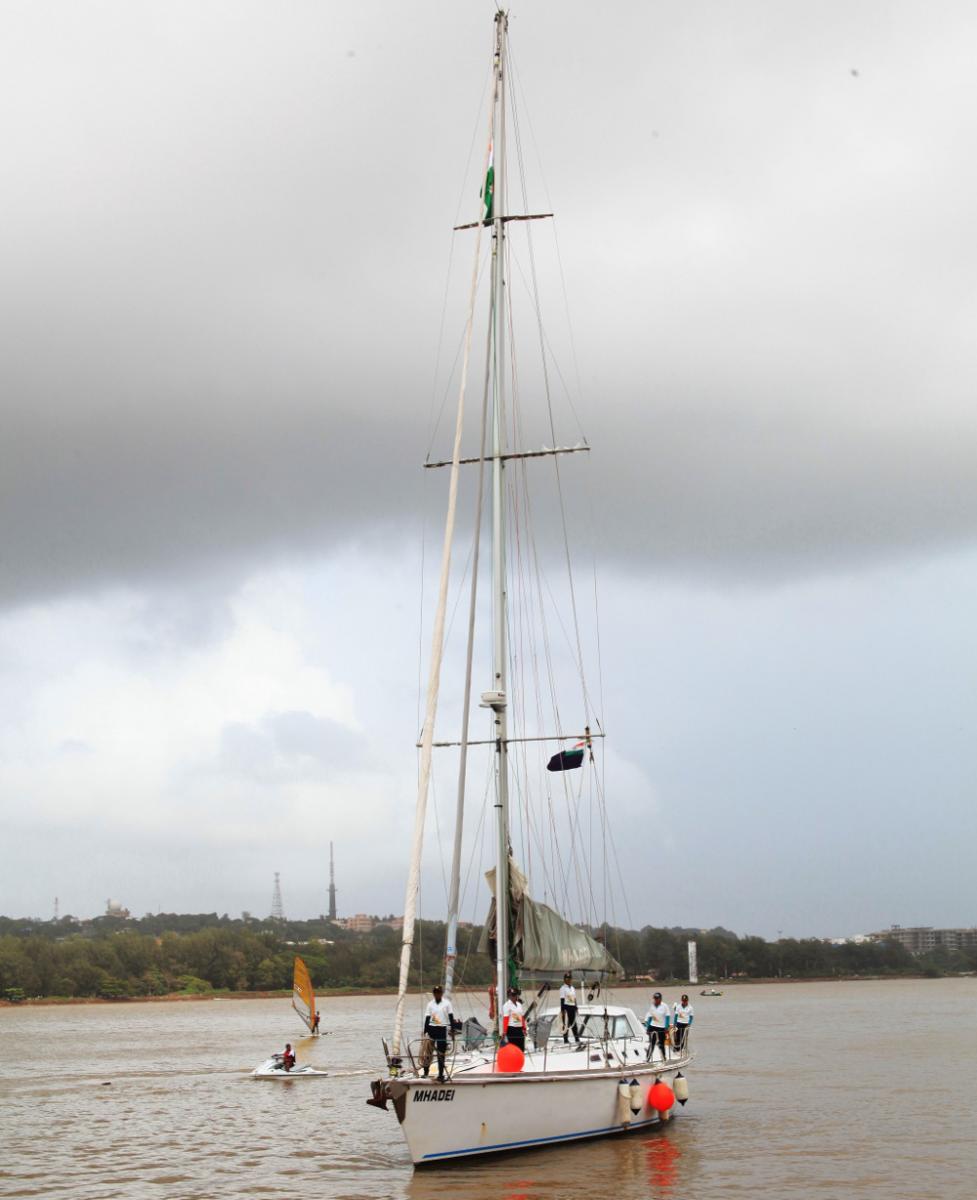 The Indian Navy’s only Ocean going sailboat, Mhadei, returned to her homeport, Goa, on 14 July 16. A team of six young women officers from the Navy registered a thrilling historic first when they returned to Goa successfully after a voyage to Mauritius. The team on their maiden, and India’s first all-women crew ocean voyage, covered a distance of over five thousand nautical miles through treacherous monsoon seas and heavy winds. The voyage had commenced in Goa on 24 May 16 and reached Port Louis, Mauritius on 14 June 2016. The team has thereafter successfully completed expedition today when they reached INS Mandovi Boat Pool. 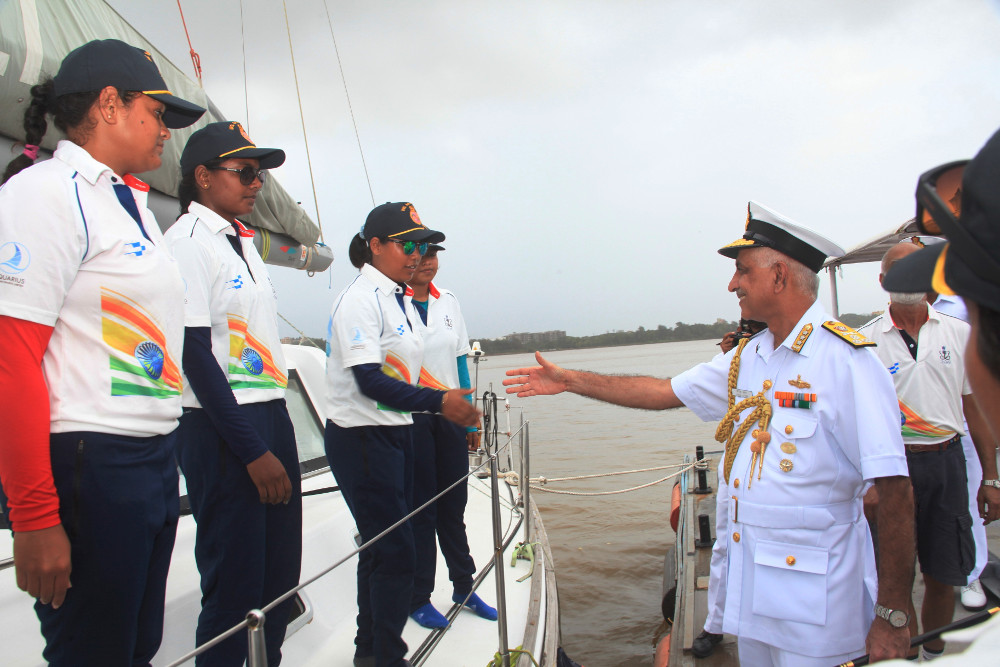 The Skipper, Lieutenant Commander (Lt Cdr) Vartika Joshi, and her five-member team comprising Lt B Aishwarya, Lt P Swathi, Lt Pratibha Jamwal, Lt Vijaya and SLt Payal Gupta were received by Vice Admiral Girish Luthra, the Flag Officer Commanding-in-Chief Western Naval Command. Present at the occasion were Senior Naval Officers and sailing enthusiasts. In the welcome remarks Vice Admiral Girish Luthra stated that this was a landmark event, wherein the team had undertaken the first ever open voyage by an Indian women crew.  He further added that this achievement showcases the courage and commitment of young Indian women, and would provide a fillip to popularise ocean sailing in India. 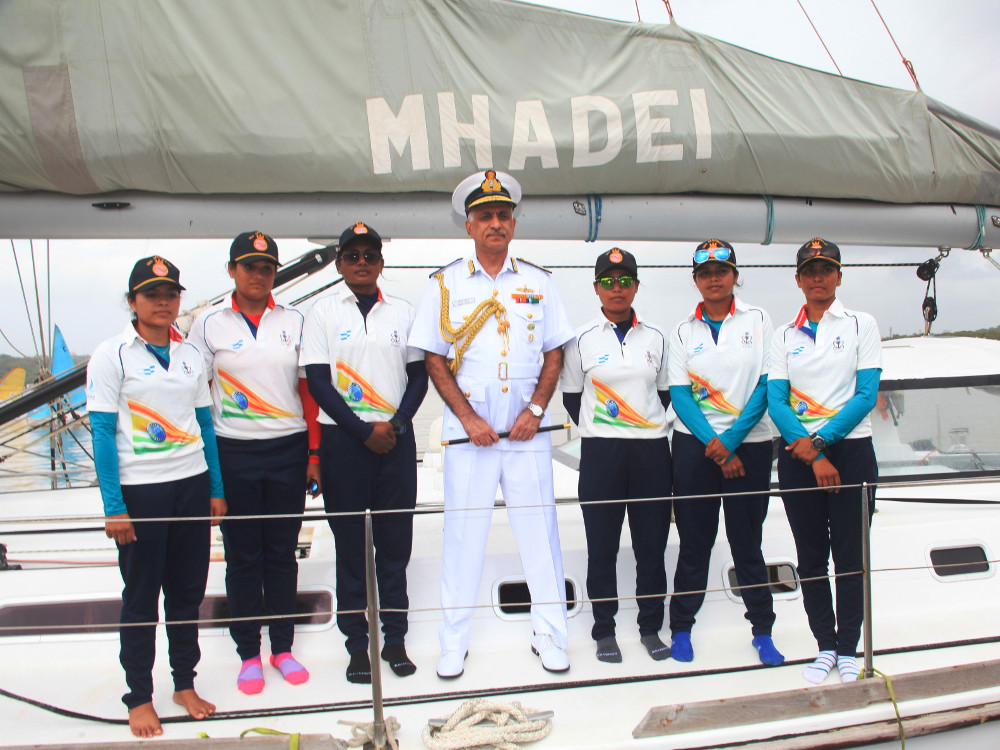 A memorabilia being presented to the team

The voyage of over 40 days at sea was aimed at exposing the Skipper and crew to rough seas expected during the monsoon period in the North Indian Ocean. This was to prepare them for the very rough weather expected to be encountered by them in the Southern Ocean during their circumnavigation of the globe. The aim of this training voyage was adequately met and the all-women crew has proved themselves capable and competent at sea. The crew would now supervise essential repairs to the boat at Goa and prepare her for the next voyage, when Mhadei would be participating in the prestigious Cape to Rio race 2017 commencing from Cape Town on 26 Dec 16.

The all-women crew will thereafter shift to the new boat presently under construction at M/s Aquarius Shipyard Pvt Ltd, Goa. The New boat is of same design as Mhadei and has been namedTarini, after the river boat goddess of Goa. The keel of the boat was laid by the Honourable Raksha Mantri Shri Manohar Parrikar on 28 March 16 at Goa. Tarini is expected to be delivered to the Indian Navy in Feb 2017 prior to India’s first all-women crew embarking on circumnavigation commencing August 2017.

Two solo circumnavigations, the first with stops by Cdr Dilip Donde, and the second, non-stop by Cdr Abhilash Tomy, has been undertaken onboard Mhadei between 2009 and 2013.