In a process extending over last three days Kalvari, the first ship of Scorpene class submarines, was set afloat in the Naval Dockyard (Mumbai) and was brought back to Mazagon Dock Shipbuilders Limited on 29 Oct 15. Mazagon Dock Shipbuilders Limited (MDL) reached another milestone as 'Kalvari' being constructed at the shipyard was separated from the pontoon and set afloat at Naval Dockyard Mumbai on 28 October 2015. The chain of events started at a glittering ceremony on 27 October 2015 when the Submarine on pontoon was moved out of MDL. 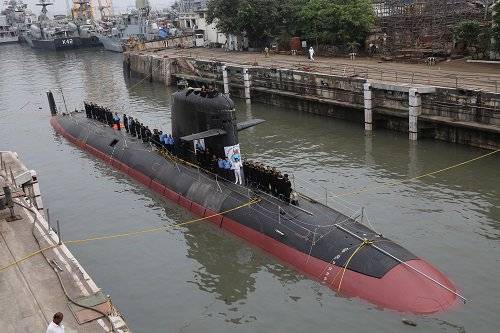 Unlike ships where equipment installation takes a long time after launching, submarines are completely fitted out at the time of floating out.  The boat is therefore now slated to undergo rigorous harbour trials and tests which would certify each system to its fullest capacity.  She is slated to commence trials at sea in a few months. Kalvari coming alongside at MDL

Rear Admiral RK Shrawat (Retd), Chairman and Managing Director, MDL said on the occasion that setting afloat of the boat is a historic milestone, which has been achieved through the hard work and perseverance of all executives and operatives of the Submarine Yard of MDL and other supporting organisations. The accomplishment of this milestone would initiate commencement of sea trials which would eventually lead to commissioning of the boat into the Indian Navy in September 2016.

Physically, Scorpene submarines are 67 meters long 6.2 meters wide and have 1,550 tones displacement. The Scorpene submarines would pack a potent punch. The state-of-art features of the Scorpene include superior stealth and the ability to launch a crippling attack on the enemy using precision guided weapons. The attack can be launched with torpedoes, as well as tube launched anti-ship missiles, whilst underwater or on surface. The Stealth features give it invulnerability, unmatched by many submarines.

The Scorpene Submarine is designed to operate in all theatres including the Tropics. All appropriate means of communications are provided to ensure interoperability with other components of the Navy. It can undertake multifarious types of missions typically undertaken by any modern submarine i.e anti-surface warfare, anti-submarine warfare, intelligence gathering, operations by special forces and mine laying etc.

Mazagon Dock is constructing six Scorpene class submarines (Project 75) under transfer of technology from DCNS, France. Subsequent boats will be delivered at gaps of nine months from each other. The project is expected to be completed by 2020.