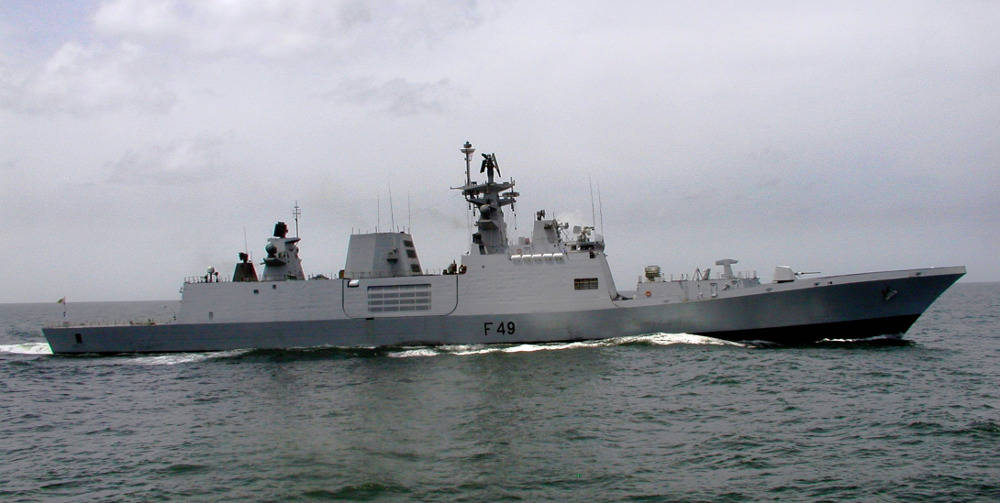 In pursuance of India’s ‘Look East’ and ‘Act East’ policy, Indian Naval Ship Sahyadri, as a part of ‘Operational Deployment’ to the South China Sea and the North West Pacific region, has entered Da Nang, Vietnam on a four day visit commencing 02 Oct 15.

The visit of INS Sahyadri is aimed at strengthening bilateral ties and enhancing inter-operability between navies of the two countries. Indian warships had last visited Hai Phong, Vietnam in August 2014. INS Sahyadri is an indigenously built warship of the Shivalik Class. Inducted into the Indian Navy on 21 July 12. The multi-role stealth frigate, boasts of an impressive array of weaponry in her arsenal. Long range anti-ship missiles, medium and short range surface to air missiles augmented by powerful guns of different calibers provide a formidable shield against all types of surface and air threats. The capability to carry two integral multi-role helicopters significantly enhances the potency of this ship. INS Sahyadri, is presently being commanded by Captain Kunal Raj Kumar.

During her stay in harbour, various activities aimed at enhancing cooperation and interaction between the two navies are planned. These include official calls and interaction with dignitaries of the Vietnamese government and the Vietnamese Peoples’ Navy (VPN), reception onboard INS Sahyadri, onboard visits by local populace, guided tours for Indian naval personnel and professional interaction between personnel of both the navies.

India and Vietnam have cultural and economic links dating back to the 2nd Century A.D, which were facilitated by maritime trade. In modern times, support during struggle for liberation from foreign rule and subsequent political and cultural exchanges have strengthened this historic relationship. In order to expand this to the security domain, a ‘Security Dialogue’ was instituted in 2003. India and Vietnam signed a Joint Declaration on the ‘Establishment of a Strategic Partnership’ in 2007 as well as a ‘MoU on Defence Cooperation’ in 2009. These have laid the foundation for strengthening maritime cooperation between the two countries.