The Honourable Prime Minister of India, Shri Narendra Modi commissioned INS Kalvari (S-21), the first of the six Scorpene class submarines built under Project 75 (Kalvari Class) into the Indian Navy at an impressive ceremony held at Naval Dockyard, Mumbai on 14 December 2017. The event marked the formal induction into the Navy of the first of the six submarines being constructed at Mazagon Docks Ltd., in collaboration with the French builder M/s Naval Group. 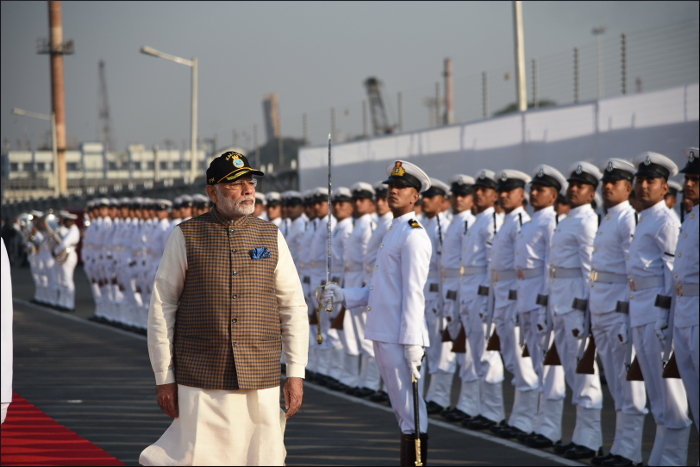 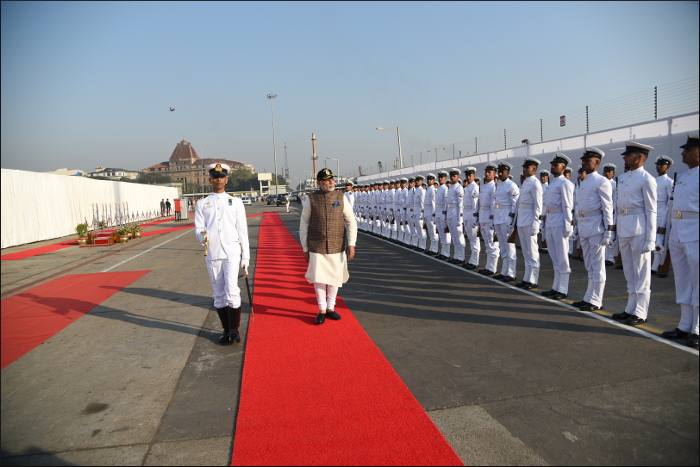 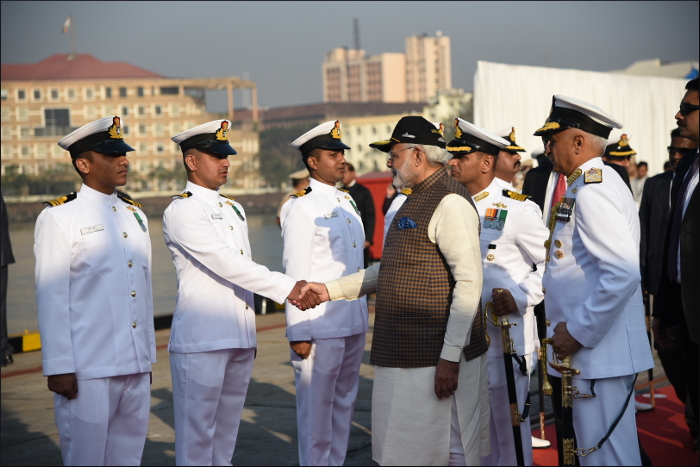 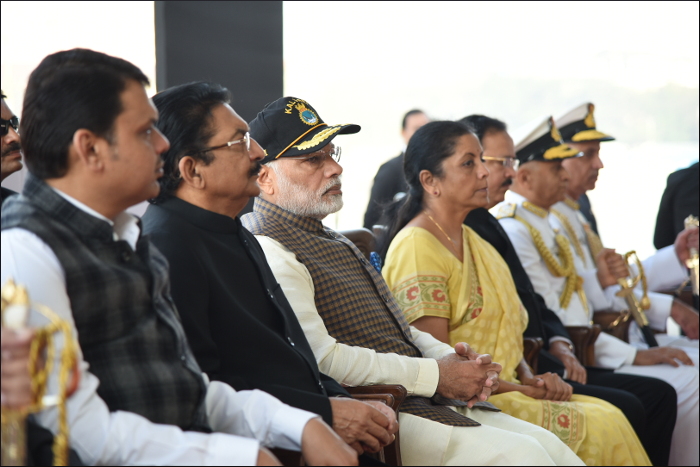 Upon arrival at Naval Dockyard, Mumbai, the Prime Minster was received by the Chief of the Naval Staff. The Prime Minster was presented a 100-man Guard of Honour and was introduced to the ship’s officers and other dignitaries present. Congratulating the people of India on this occasion, the Prime Minister described INS Kalvari as a prime example of "Make in India." He commended all those involved in its manufacture. He described the submarine as an excellent illustration of the fast growing strategic partnership between India and France. He said the INS Kalvari will add even more strength to the Indian Navy. The Prime Minister said that the 21st century is described as Asia's century. He added that it is also certain that the road to development in the 21st century goes through the Indian Ocean. That is why the Indian Ocean has a special place in the policies of the Government, he added. The Prime Minister said this vision can be understood through the acronym SAGAR - Security and Growth for All in the Region. 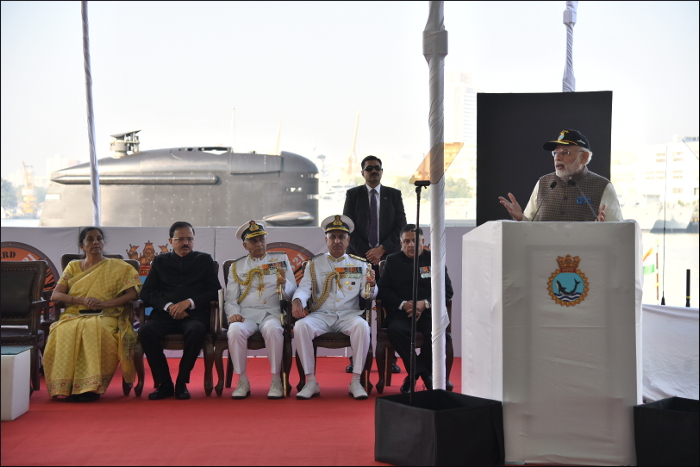 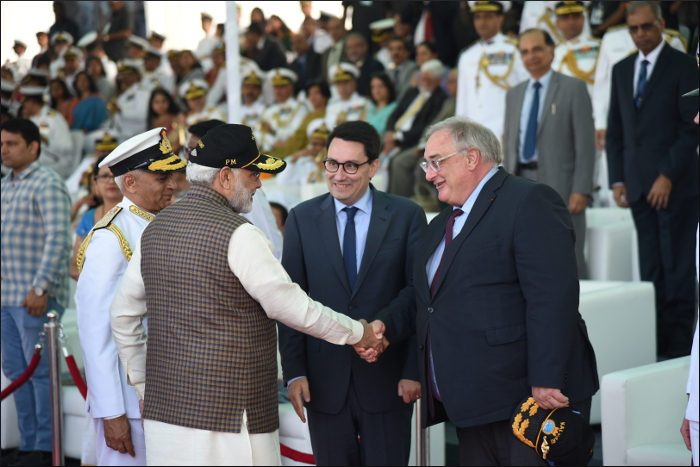 The Prime Minister said India is fully alert with regard to its global, strategic and economic interests in the Indian Ocean. He said that is why the modern and multi-dimensional Indian Navy plays a leading role in promoting peace and stability in the region. He said the ocean's innate potential adds economic muscle to our national development. That is why, he added, India is well aware of the challenges such as sea-borne terrorism, piracy, and drug trafficking, that not just India, but other nations in the region also have to face. He said India is playing a key role in tackling these challenges. 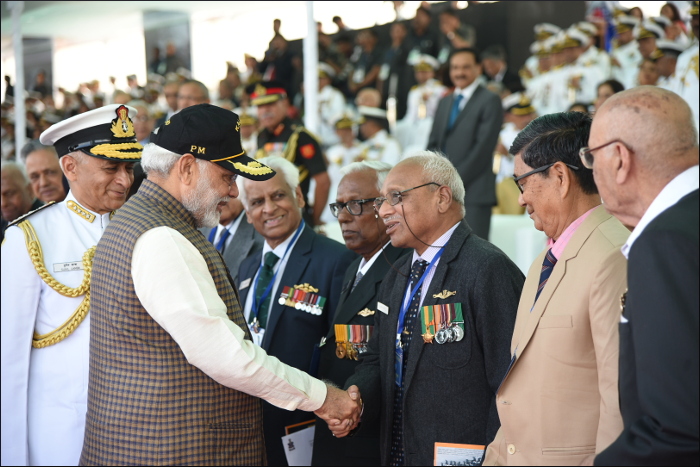 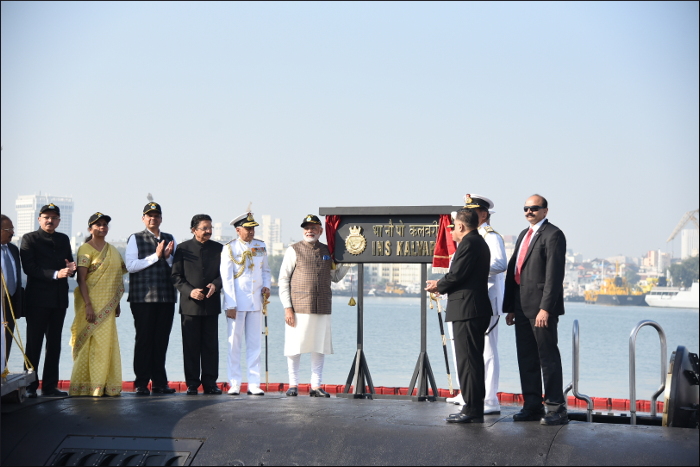 He said India believes that the world is one family, and is fulfilling its global responsibilities. India has played the role of "first responder" for its partner countries, in times of crises, he added. He said the human face of Indian diplomacy and Indian security establishment is our speciality. He said a strong and capable India has a vital role to play for humanity. He said countries of the world wish to walk with India on the path of peace and stability. The Prime Minister said that the entire ecosystem related to defence and security has started to change in the last three years. He said the skill-set accumulated during the manufacture of INS Kalvari is an asset for India. 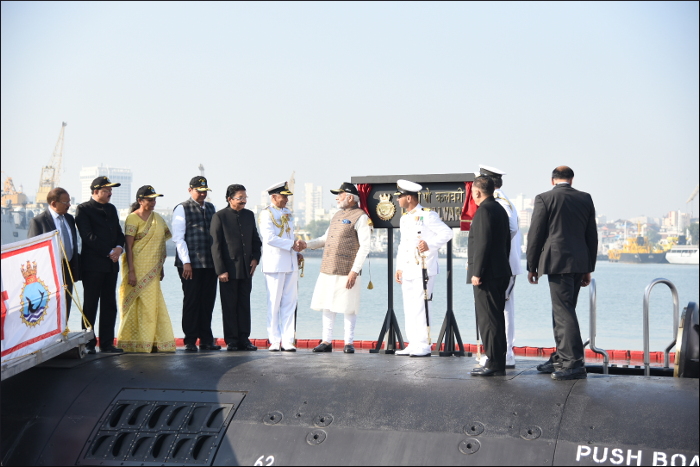 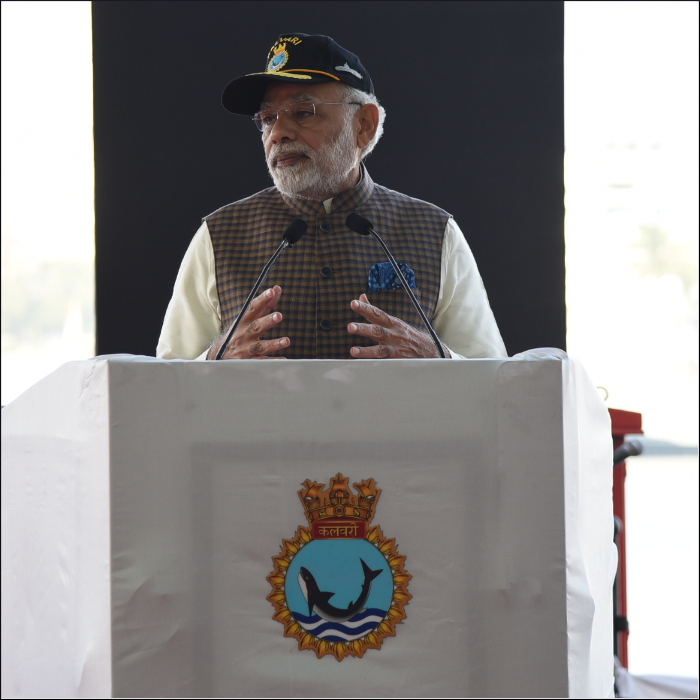 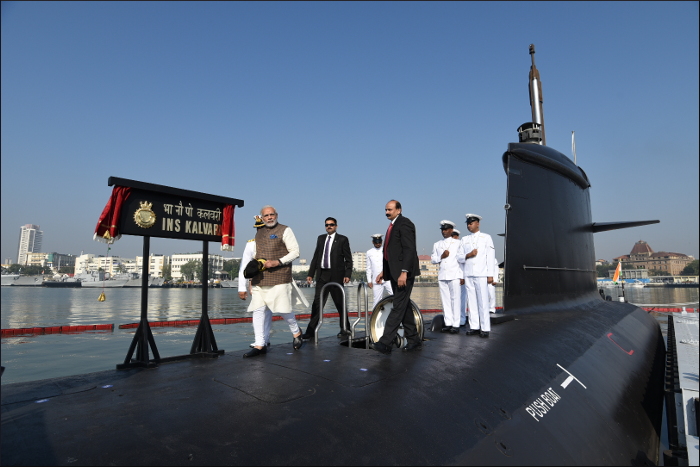 Hon'ble Prime Minister Sh. Narendra Modi on the Casing of INS Kalvari After a Walk Around Onboard 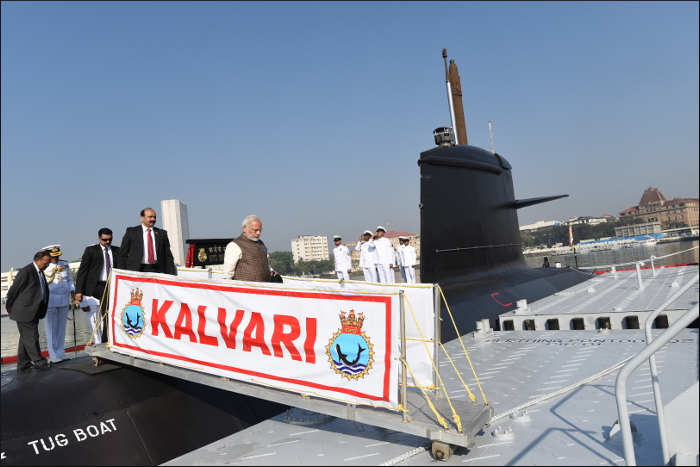 Congratulating the MDL for restarting the production line of submarines once again, Mrs Nirmala Sitharaman, the Raksha Mantri thanked the Yard workers, who she said “mattered high on this day”. The process of submarine construction has again been started in the country and it should not stop, the Raksha Mantri said. She emphasized the need to avoid episodic starts and stops in the industry and maintain a pool of skills needed to build high technology platforms within the country, sustenance of which would lead to a virtuous cycle of betterment for Indian industry, retention of skills and better peace dividends to the nation.

Welcoming the gathering, Admiral Sunil Lanba stated that this commissioning marked a milestone in the journey of the Indian Navy towards indigenous submarine building. The Indian Navy is deeply committed to the principle of indigenisation and the Government’s thrust on ‘Make in India’. Commissioning of Kalvari is a testimony of our resolve and these achievements are a result of the Indian Navy’s proactive and integrated approach to achieve self-reliance, the Admiral said.

INS Kalvari is manned by a team comprising 08 officers and 35 sailors with Captain SD Mehendale at the helm as her first Commanding Officer. The commissioning will augment the offensive capability of the Indian Navy, and the Western Naval Command in particular.