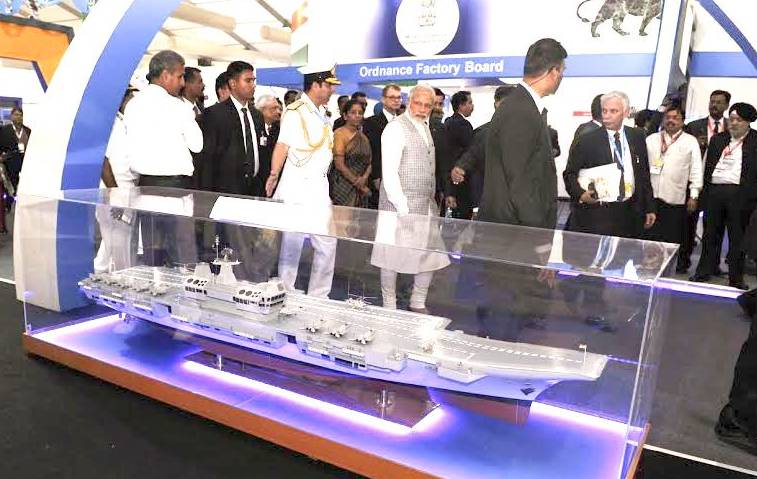 The Department of Policy and Promotion (DIPP), Government of India is hosting the ‘Make in India Week' (MIIW), at Mumbai from 13 to 18 Feb 2016. A large exhibition is being held at 'Make in India' Centre, MMRDA Grounds, Bandra-Kurla Complex during the MIIW. Of the ten focus centres of the exhibition, the Indian Navy is participating actively in the 'Defence' pavilion. The exhibition was inaugurated by the Hon'ble PM on 13 Feb 2016 and was attended by Heads of State, Senior Government Dignitaries, foreign diplomats and doyens of Industry. The Indian Navy has set up stalls exhibiting indigenisation initiatives and innovations undertaken, especially in the domain of shipbuilding and repair with the theme 'Self Reliance through Indigenisation & Innovation'. 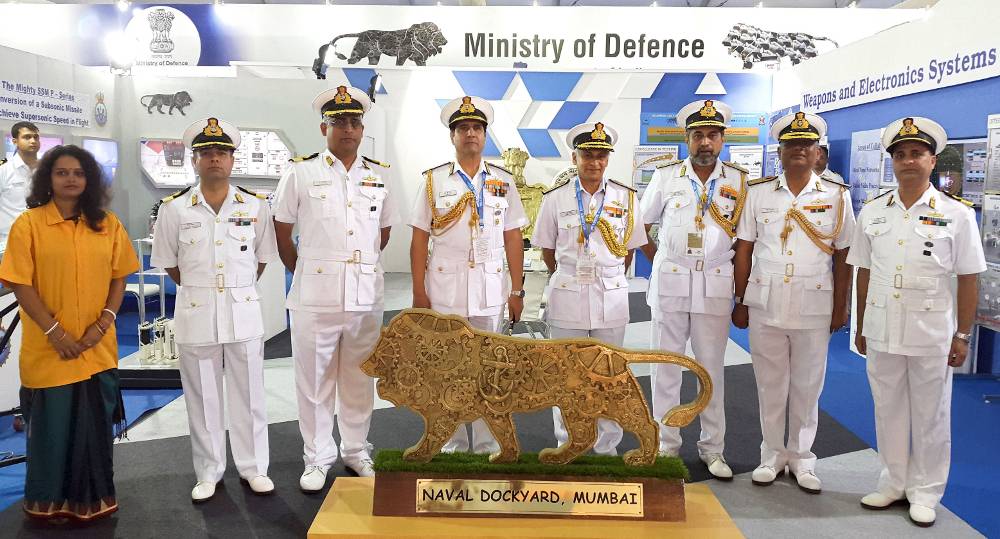 The Indian Navy's Design Directorate has set up a stall in the exhibition. Standing out as an example of indigenisation to the country, Indian Navy has transformed from a buyer's Navy to builders Navy over the last five decades. Today, 46 warships and submarines are being made in India with projects worth Rs 1,34,761 Crores being executed in Indian Shipyards over the next decade or so. This transformation was achieved through extensive perspective planning looking at future scenario and requirements for 10 to 20 years window. 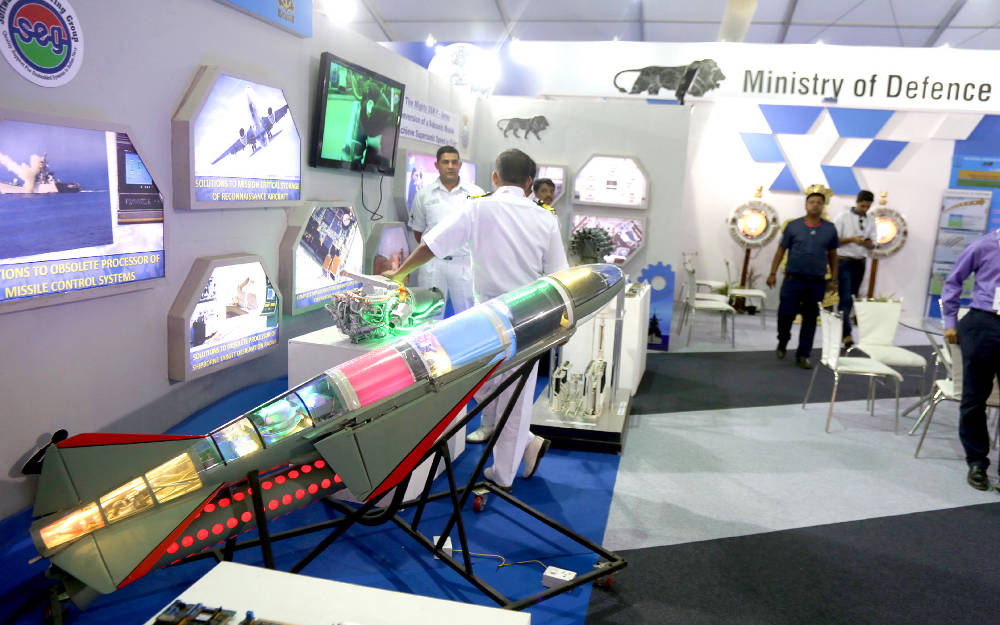 Innovation and Weapon And Electronic Systems Engineering Establishment stall by Indian Navy. Indian Navy is saving government exchequer by promoting 'Make In India'. The stall brings out the innovations by naval engineers

The steps to self reliance started with indigenously building, INS Nilgiri, a British Leander class frigate at Mazagaon Dock Shipbuilders Limited (MDL) in 1972. With the experience gained in the field and using the same propulsion plant as Leanders, Godavari Class frigates were both designed and built in India paving the way for slow but steady road to self reliance. The Indian Navy's Directorate of Naval Design completed 50 years in 2014 and has played a critical role in Navy's ability in design of warships and absorb ship building technology. A close cooperation with the Indian Ship yards through Warship Overseeing Teams lead to ensuring seamless transformation of designs as perceived by the users into warships and submarines as produced by the shipyards. 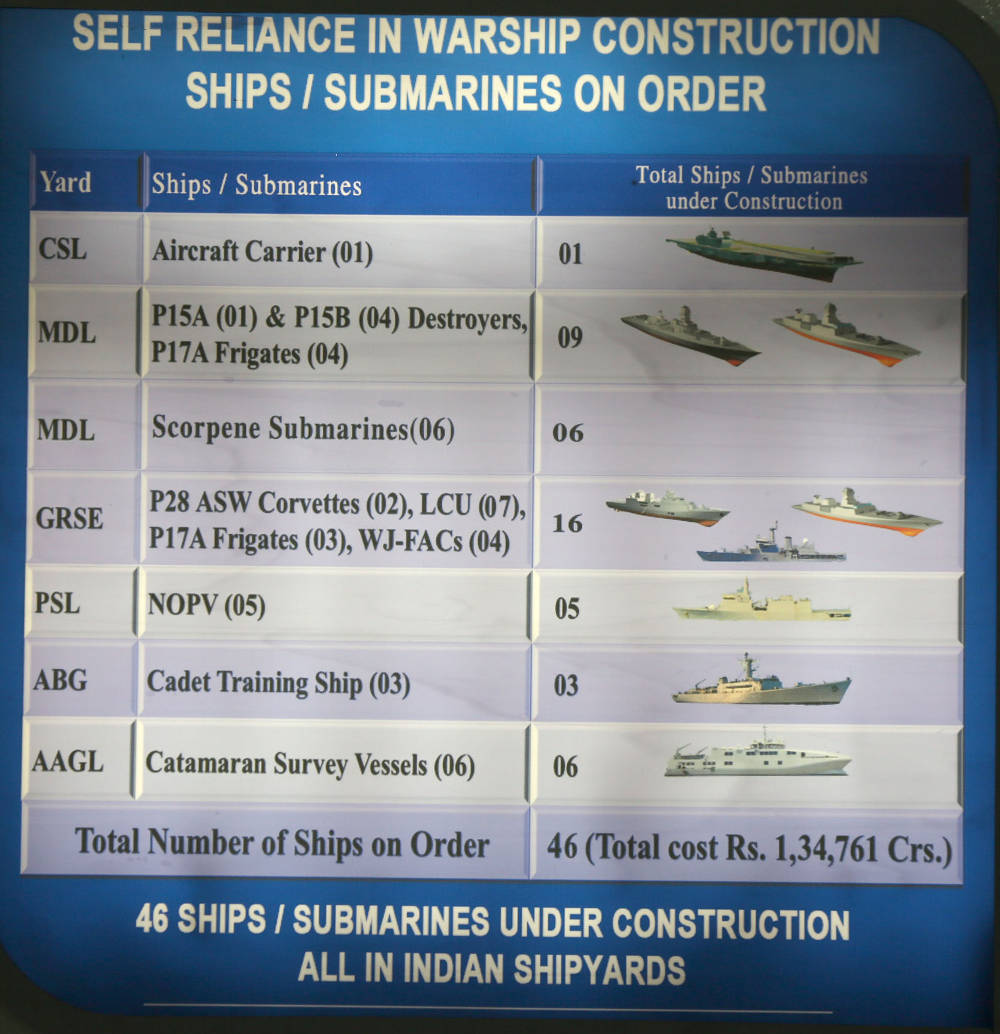 Indian Navy has also prepared a stall on innovation and developments by Naval Dockyard (Mumbai) and Weapons and Electronic Systems Engineering Establishment (WESEE). WESEE section lays out the requirements of Indian Navy in terms of upcoming technologies in fields of Information Technology and Combat Management Systems. While having already saved thousands of crore rupees to government exchequer in the last few years by partnering in new projects with indigenous companies WESEE is able to design and produce high technology equipment specifically required for the Indian Navy. The stall is looking at partnership development in fields of interest to the Indian Navy.