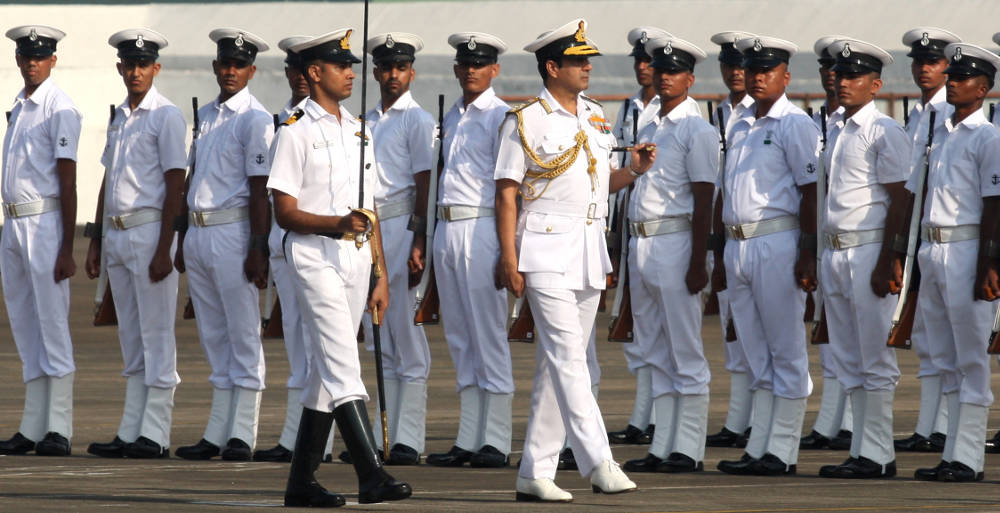 The illustrious and unique Sea Harriers of Indian Naval  Air Squadron (INAS 300) were given a befitting farewell in a function organised at INS Hansa,Goa. The function was attended by Admiral RK Dhowan, Chief of the Naval Staff, Vice Admiral Sunil Lanba, Flag Officer Commanding in Chief Western Naval Command, serving and retired Officers and Men of the Indian Navy and all personnel who have served in the INAS 300. Speaking on the occasion Admiral RK Dhowan lauded the stellar role played by the squadron in the defence of the country and acknowledged the professionalism of the pilots, the maintainers and all those personnel associated with flying and maintaining the aircraft in peak efficiency during their service. He said that the rich legacy would continue as the baton is being passed on to the proud young crew of the MiG 29K squadron who have been successful in seamlessly integrating the fighters with INS Vikramaditya in the shortest possible time.

In appreciation of the faithful service to the nation by INAS 300 ‘White Tigers’,an impressive ceremony was held on 11 May 2016 which saw the Sea Harriers fly for one last time, and MiG-29K flanking their outgoing cousins and ceremoniously taking their place. The air display included supersonic pass by MiG 29s and formation flying by two each Sea Harriers and MiG 29Ks. The composite air display symbolized a smooth transition from the old to the new in continuance with the proud legacy of the INAS 300. On completion of the Air display, ”washing down of the Sea Harriers” was carried out in a traditional manner. A first day cover was also released by Admiral RK Dhowan to mark the occasion. 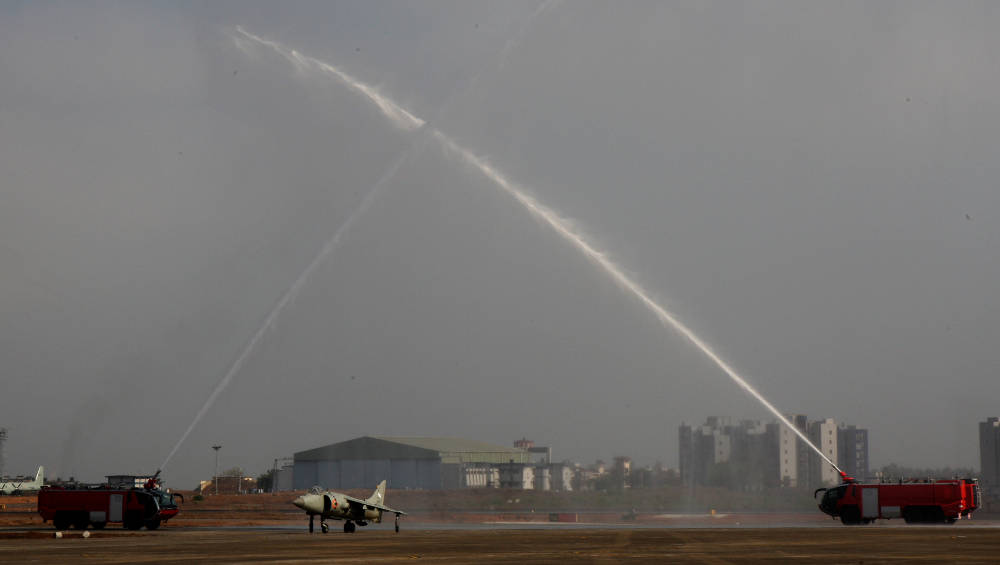 Traditional washing down of the Sea Harriers as it completes its last flight at INS Hansa,Goa

The White Tigers or INAS 300 who stand for excellence, determination and aggressive spirit, heralded the era of carrier borne aviation into the Indian Navy. Almost six decades ago the squadron was commissioned at RNAS Brawdy with its distinctive ‘White Tiger’ logo and equipped with the Sea Hawk aircraft. After providing yeoman service for over two decades, the squadron was subsequently reincarnated with Sea Harriers in 1983. This premier carrier borne fighter squadron achieved iconic status in the Indian Navy with its distinguished service, receiving numerous gallantry awards which include one Maha Vir Chakra, four Vir Chakras and one Nau Sena Medal.

INAS 300 old and new together with Admiral RK Dhowan at INS Hansa, Goa

From the time the white tigers came into being, ‘Three Hundred’ as the squadron is colloquially called, brought about transformational change in concept of naval operations. INAS 300 with its potent sea harriers formed the teeth of naval combat power and consequently was the center piece of naval operational strategy. With their professionalism, the White Tigers assured control of these as by ensuring air dominance for the Carrier Battle Group and were a force to reckon with, with their combat skills appreciated by many which included foreign navies as well as the Indian Air Force. 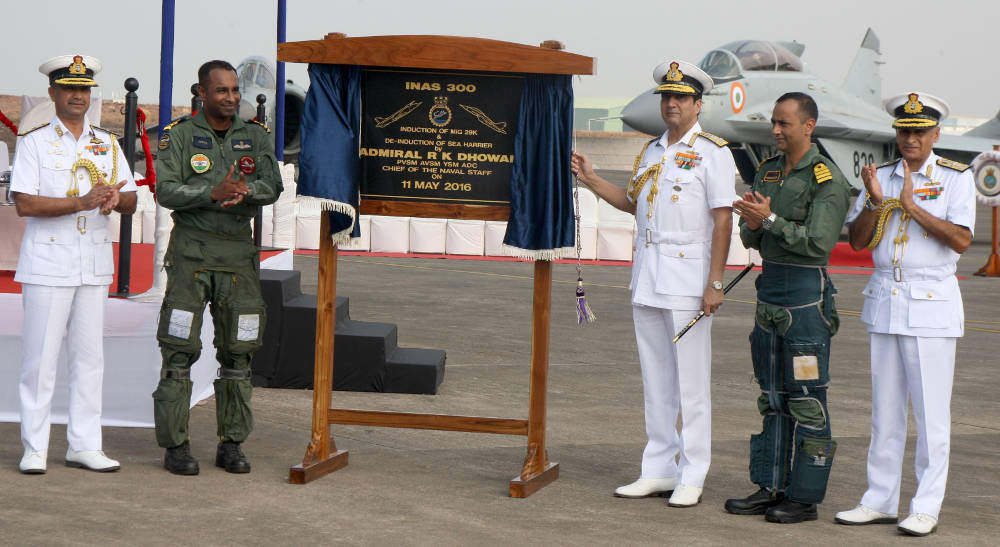 Unveiling of plaque marking the de-induction of Sea Harriers and induction of MiG 29Ks in INAS 300 at INS Hansa,Goa

After 33 years sterling service, the sea harriers were being de-inducted from the Navy and under took its last flight on 11 May 2016. To continue the proud ‘White Tiger’ legacy, the squadron has been re-equipped with the new and more lethal MiG 29Ks. INAS 300 would thus be re-equipped with the new swing role air dominance fighter giving the squadron enhanced combat power and offensive capability. For the versatile White Tigers, this resurrection also marks a full cycle from commissioning ‘Tail Hooking Sea Hawks’ to the ‘Vectored Thrust’ Sea Harrier era; and now with the induction of the MiG-29k to this elite squadron, marks the return of the ‘Tail Hookers’. 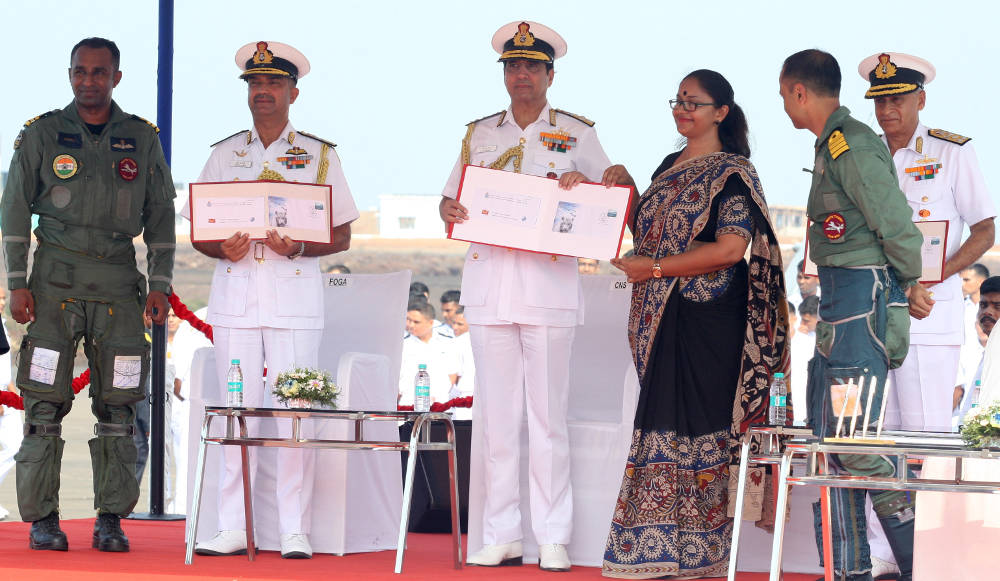