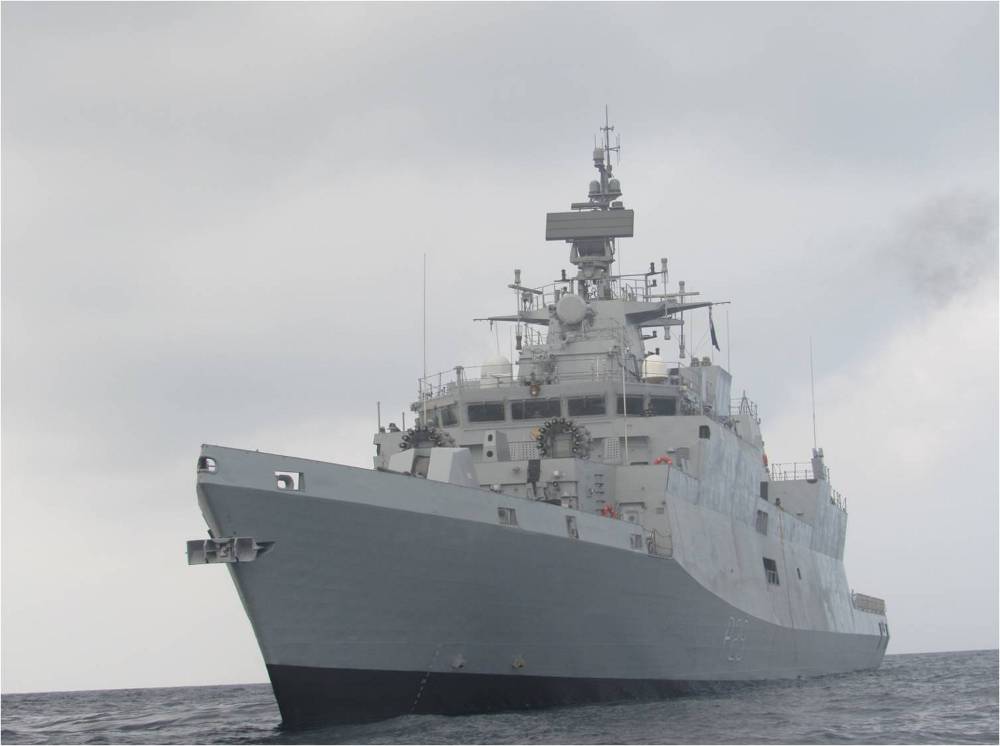 A unique feature of the ship is the high level of indigenisation incorporated in the production, accentuating our national objective of ‘Make in India’. About 90% of the ship is indigenous. The ship has been indigenously designed by the Indian Navy’s in-house organisation, Directorate of Naval Design and constructed by Garden Reach Shipbuilders and Engineers Limited, Kolkata.Directorate of Naval Design (DND) is the Navy’s Design Organisation undertaking indigenous design of all surface combatants.

Kadmatt is the latest indigenous ship after Shivalik class, Kolkata class and INS Kamorta wherein a plethora of weapons and sensors have been integrated to provide a 'Common Operational Picture (COP)'. The ship has many state of the art equipment which include the rail-less helo traversing system and foldable hangar door for the integral ASW helicopter which not only increases the strike capability of the ship but also enhances the detection capability manifold.The ship’s weapons and sensors suite is predominantly indigenous and showcases the nation’s growing capability in this niche area.

This second ship of Project 28 has a low radio, acoustic, magnetic and IR signature owing to a ‘X’ shaped hull form, raft mounted engines and an IR suppression system. The unique architecture used to fit the engines on a separate mounting reduces its underwater noise thereby making it difficult to detect by sonars of enemy ships and submarines. The IR suppression system reduces the heat emitted by the ship reducing the Infra red signature thereby defending the ship from heat seeking missiles. The ship has been constructed using high grade steel (DMR 249A) produced in India. With a displacement of 3500 tonnes, the sleek and magnificent ship spans 109 meters in length and 14 meters at the beam and is propelled by four diesel engines to achieve speeds in excess of 25 knots with an endurance of 3450 nautical miles.

The ship also boasts of an advanced 3D Medium Range Air/ Surface Surveillance Radar developed by DRDO and produced by Bharat Electronics. The radar has an integrated IFF system co-mounted on a planar array antenna capable of tracking air/ surface targets hundred of kilometers away and differentiates between friendly and enemy units. The ship is also designed to carry an Anti submarine helicopter which not only increases the strike capability of the ship but also enhances the detection capability manifold.

The ship has a potent strike capability with guns, close in weapon system, heavy weight torpedoes and anti-submarine rockets. Very soon the ship will also be fitted with vertically launched Surface to Air Missiles to neutralise enemy missiles.

The ship will be manned by 13 officers and 180 sailors with Commander Mahesh Chandra Moudgil at the helm as her first Commanding Officer. Upon commissioning, the ship would be an integral part of the Eastern Fleet under the Eastern Naval Command.

Commissioning of the ship will mark yet another milestone in indigenous warship building and is indicative of the growing in-house competence in design, warship building capability and technological strides being made by the nation. Upon commissioning, the ship will form part of the Eastern Fleet which shoulders the responsibility of safeguarding the Eastern Seaboard of India.