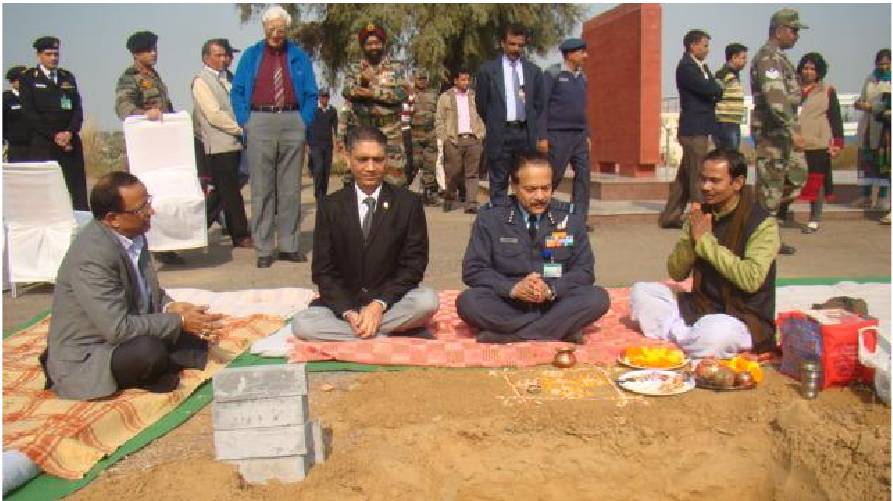 Ministry of Defence had acquired 205 acre and 15 marla of land in September 2012 in Gurgaon for setting up of world class Indian National Defence University, the first of its kind in India.  Shri Manmohan Singh, former Prime Minister of India laid the foundation stone in May 2013. However, to meet the aspirations and need of the villagers of Binola and Bilaspur of having access from their fields to National Highway - 8, Ministry of Defence transferred 2 acre 3 kanal 9½ marla of land to Government of Haryana in August this year to be used by the villagers as village track.  With all revenue related issues resolved, infrastructure development at the University finally commenced with Bhoomi Pujan ceremony held at Indian National Defence University site on 17 December 2015.

Air Marshal AS Bhonsle, AVSM, VSM of Integrated Defence Staff was the Chief Guest on the occasion who laid the first brick for the construction of boundary wall, perimeter road, guard room and watch towers.  The ceremony was attended by the officials from the Ministry of Defence, Directorate of Indian National Defence University, Chief Engineer, Delhi Zone, Revenue Department of Gurgaon, Police and villagers from Binola and Bilaspur.  Air Marshal AS Bhonsle while interacting with the villagers stated that it is matter of pride for Manesar Tehsil, in general and Binola and Bilaspur in particular to have a prestigious world class institution in their area, which in the years to come will result in rapid growth in the neighbourhood and also provide job opportunities to the youth.