In pursuance of the Government of India’s guidance to promote and facilitate innovations by youth of the nation, the Indian Navy has taken a lead by instituting a new series of ‘Innovation Trophy’ for both Uniformed and Defence Civilian personnel, of Afloat and Ashore units. The newly instituted awards for Winner and Runner-Up in each category (total 04 only) were given away by the Hon’ble Prime Minister of India Shri Narendra Modi this evening (04 Dec 15) during the Navy Day Reception at Navy House, New Delhi. Prior to the presentation of awards, some of the salient innovations and indigenisation initiatives were demonstrated. The event was witnessed by all dignitaries including foreign diplomats invited for the Navy Day Reception through live video feed on multiple large screen displays. 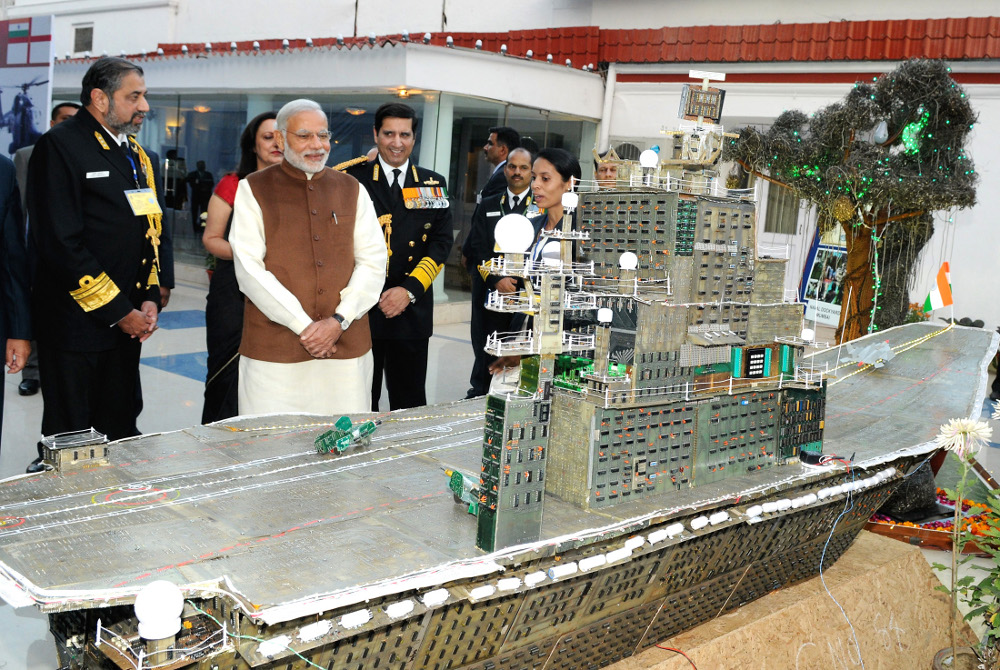 The Prime Minister, Shri Narendra Modi during the 'At Home' reception, organised by the Chief of Naval Staff, Admiral R.K. Dhowan, on the occasion of Navy Day, in New Delhi

This initiative has led to enthusiastic competition amongst a wide cross-section of young Officers, Sailors and Defence Civilians of various trades and specialisations. Units of all Commands, including Andaman and Nicobar Command, had participated in the competition. A total of 135 entries highlighting significant innovations in operations and maintenance domains, were received as nominations after short-listing by respective Commands. The process of selection of Winner and Runner-Up in each category was undertaken by a Selection Committee comprising of domain experts, as per a pre-decided assessment matrix.

To facilitate showcasing of the salient Innovations and Indigenisation initiatives, a unique ‘Innovation and Indigenisation Pavilion’ over an approx area of 3000 Sqft was set up at the venue. Salient highlights of demonstrations showcased in the Pavilion are as follows:-

This initiative by IN to institute Innovation Trophy and showcasing of initiatives to the Hon’ble Prime Minister and other dignitaries during Navy Day Reception has spurred further enthusiasm amongst young personnel to find innovative solutions to day-to-day challenges posed due to technology denial, obsolescence, resource constraints etc. The end objective is to effectively use the power of innovative problem solving as a force multiplier and redouble the momentum towards ‘Self Reliance through Indigenisation and Innovation’. 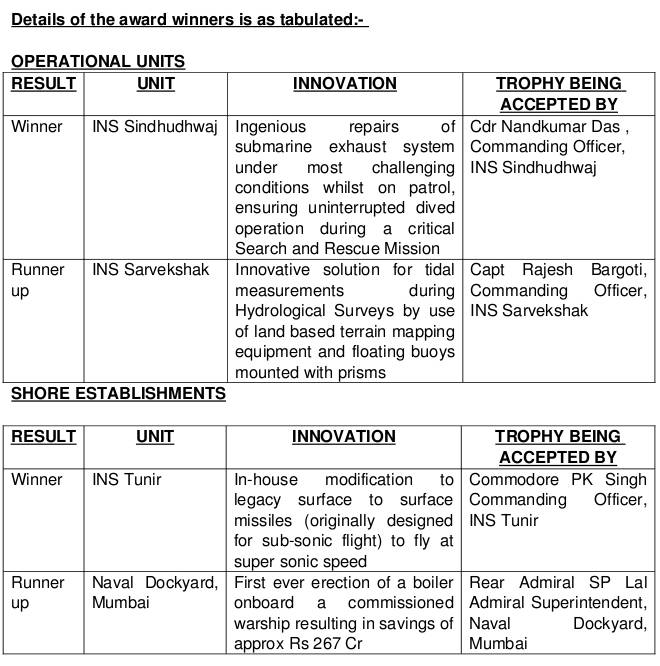