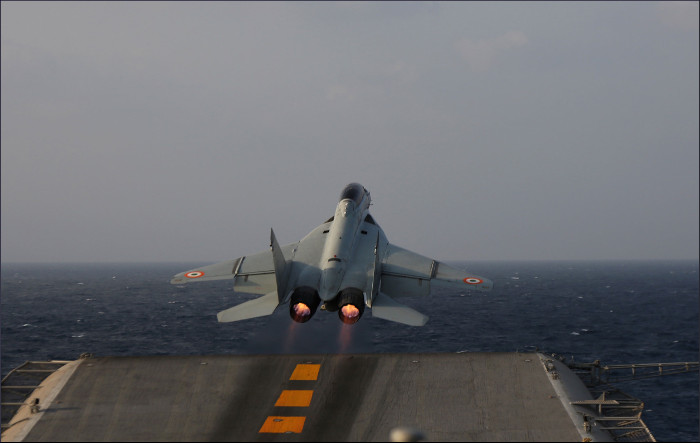 The CNS witnessed a host of exercises viz. Gunnery shoots, Surface to Air missile engagements, Brahmos firing and operations of the combined Fleet in a complex multi threat environment including sub surface and air threats. The high-point of the exercise was Large Force Engagement (LFE) by the Fleet units against threat simulated by air element from Indian Air Force comprising AWACS, SU 30s, Jaguars and IL 78 (AAR). These threats emanated from different directions and were neutralised by using Beyond Visual Range (BVR) missile capabilities of MiG 29Ks, the integral air arm of the Indian Navy, operating from  INS Vikramaditya in coordination with other Fleet units. All these exercises validated the combat effectiveness of IN platforms. 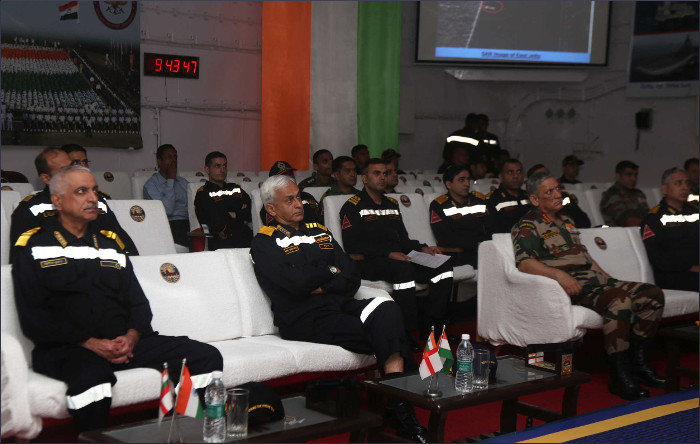 CNS and COAS getting briefed about the TROPEX 2017

The CNS during his address to the Fleet congratulated the men for keeping the fleet combat ready at all times and executing all assigned tasks in a most professional manner. CNS also mentioned that training during peace time has to be at par with how we would fight during war and emphasised on taking bold decisions with due cognisance to risks involved and ensuring safety of men and material.

TROPEX 2017 is a month long exercise/ war drill, encompassing all dimensions of maritime warfare and is witnessing participation of over 60 ships, 05 submarines and more than 70 naval aircraft. It also includes participation of a large number of assets from the Indian Air Force, such as SU-30 and Jaguar fighters, AWACS, C 130J Hercules and in-flight refuelling aircraft, Infantry amphibious elements from Indian Army and ships/ aircraft from the Indian Coast Guard.

The area of operations for TROPEX 2017 exercise spans across the vast expanse of the Arabian Sea and North Central Indian Ocean and serves as an opportunity to validate the Indian Navy’s Concepts of Operation.

As a part of the exercise, niche capabilities of the Marine Commandos (MARCOs) and Army Special Forces, including Airborne Assault and Combat Free Fall were undertaken from IAF C-130 aircraft. Naval forces, while enforcing sea and airspace control all around the affected islands, undertook beaching and heli-borne operations for landing of follow-on forces. The exercise culminated with restoration of sovereign control over the affected islands, by the Armed Forces. During debrief of the exercise, CNS and COAS discussed various options to further enhance the effectiveness of the joint exercise.

TROPEX 17 assumes special significance in the backdrop of the current security scenario, being aimed at testing combat readiness of the combined fleets of the Indian Navy, and the assets of the Indian Air Force, Indian Army and the Indian Coast Guard. It will also strengthen inter-operability and joint operations in a complex environment.